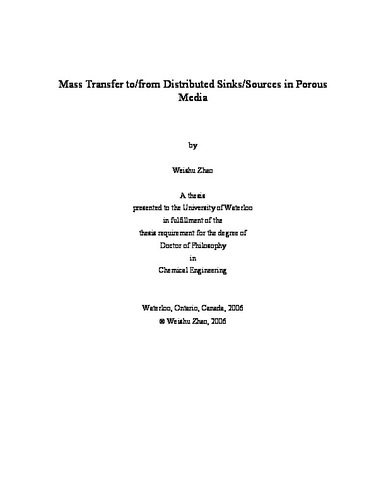 This research addresses a number of fundamental issues concerning convective mass transfer across fluid-fluid interfaces in porous media. Mass transfer to/from distributed sinks/sources is considered for i) the slow dissolution of liquid filaments of a wetting non-aqueous phase liquid (NAPL) held in the corners of angular pores or throats and ii) the fate of gas bubbles generated during the flow of a supersaturated aqueous phase in porous media. 1. Effects of the stability of NAPL films on wetting NAPL dissolution Wettability profoundly affects the distribution of residual NAPL contaminants in natural soils. Under conditions of preferential NAPL wettability, NAPL is retained within small pores and in the form of thick films (liquid filaments) along the corners and crevices of the pore walls. NAPL films in pore corners provide capillary continuity between NAPL-filled pores, dramatically influencing the behaviour of NAPL dissolution to the flowing aqueous phase by convection and diffusion. A pore network model is developed to explore the dissolution behaviour of wetting NAPL in porous media. The effects of initial NAPL distribution and NAPL film stability on dissolution behaviour are studied using the simulator. NAPL phase loses continuity and splits into disconnected clusters of NAPL-filled pores due to rupture of NAPL films. Quasi-state drainage and fingering of the aqueous phase into NAPL-filled pores is treated as an invasion percolation process and a stepwise procedure is adopted for the solution of flow and solute concentration fields. NAPL film stability is shown to critically affect the rate of mass transfer as such that stable NAPL films provide for more rapid dissolution. The network simulator reproduces the essential physics of wetting NAPL dissolution in porous media and explains the concentration-tailing behaviour observed in experiments, suggesting also new possibilities for experimental investigation. 2. Convective Mass Transfer across Fluid Interfaces in Straight Angular Pores Steady convective mass transfer to or from fluid interfaces in pores of angular cross-section is theoretically investigated. The model incorporates the essential physics of capillarity and solute mass transfer by convection and diffusion in corner fluid filaments. The geometry of the corner filaments, characterized by the fluid-fluid contact angle, the corner half-angle and the interface meniscus curvature, is accounted for. Boundary conditions of zero surface shear (‘perfect-slip’) and infinite surface shear (‘no-slip’) at the fluid-fluid interface are considered. The governing equations for laminar flow within the corner filament and convective diffusion to or from the fluid-fluid interface are solved using finite-element methods. Flow computations are verified by comparing the dimensionless resistance factor and hydraulic conductance of corner filaments against recent numerical solutions by Patzek and Kristensen [2001]. Novel results are obtained for the average effluent concentration as a function of flow geometry and pore-scale Peclet number. These results are correlated to a characteristic corner length and local pore-scale Peclet number using empirical equations appropriate for implementation in pore network models. Finally, a previously published “2D-slit” approximation to the problem at hand is checked and found to be in considerable error. 3. Bubble evolution driven by solute diffusion during the process of supersaturated carbonated water flooding In situ bubble growth in porous media is simulated using a pore network model that idealizes the pore space as a lattice of cubic chambers connected by square tubes. Evolution of the gas phase from nucleation sites is driven by the solute mass transfer from the flowing supersaturated water solution to the bubble clusters. Effects of viscous aqueous phase flow and convective diffusion in pore corners are explicitly accounted for. Growth of bubble clusters is characterised by a pattern of quasi-static drainage and fingering in the gas phase, an invasion percolation process controlled by capillary and gravitational forces. A stepwise solution procedure is followed to determine the aqueous flow field and the solute concentration field in the model by solving the conservation equations. Mobilization of bubbles driven by buoyancy forces is also studied. Results of bubble growth pattern, relative permeability and macroscopic mass transfer coefficient are obtained under different gas saturations and aqueous flow conditions.