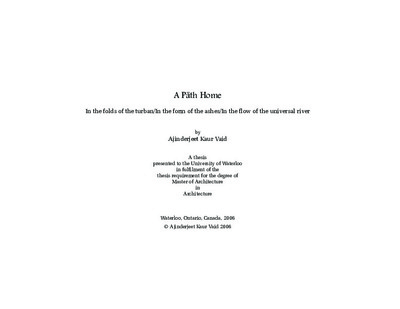 With the shift in perspective from temporary to permanent residence in this country, Sikhs are caught in between two polar ends of homeland and diaspora. This thesis attempts to illuminate a third – a universal permanence free of physical barriers. This account describes a movement towards establishing a Sikh homeland that is manifested in the collective Sikh body of the world rather than in the physical land of Punjab. The turban that is the physical identity of the Sikhs in diaspora has also come to represent the rigidities of the culture, which neglect the omnipresent divinity, and sacredness of every place. In its form and content, this thesis is engaged in “unfolding of the turban” to open it to the new worlds it is now a part of, to create a new beginning as a human body unfolds upon death into its five primal elements on the verge of reviviscence. Sikhs worldwide are aware of their need to convert diaspora back into a homeland, to fight against restrictions that hinder the completion of rituals of life and death. The unraveling of the turban into an undulating path allows for a new perspective on permanence for the Sikhs in foreign lands. Unfolded into a form of the meandering river, the turban also represents the eternally flowing waters. The silent sacredness of the water indistinctly exists in Toronto. Behind the towering city, the Don River often flows quietly, leading a life parallel to that of the River Ganges and the River Sutlej. This once pastoral valley that sustained villages and nature is now discarded, in post-industrial despair. Trapped within these modern city confines, the river still secretly retains the power to transfigure souls, but its powers of reviviscence remain unidentified and unused due to restrictive cremation bylaws. This thesis attempts to create for the Sikhs an essential funeral landscape, whose icons may be read through an anamorphic lens of Sikh culture, while providing for all an opportunity to engage the forgotten river, and its energy.