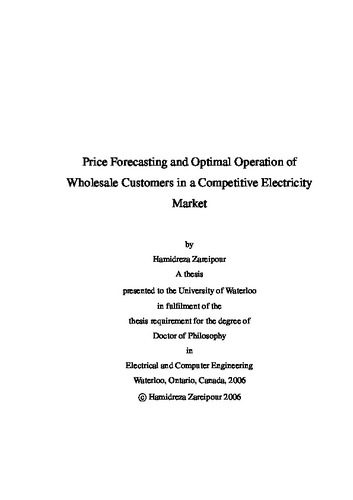 This thesis addresses two main issues: first, forecasting short-term electricity market prices; and second, the application of short-term electricity market price forecasts to operation planning of demand-side Bulk Electricity Market Customers (BEMCs). The Ontario electricity market is selected as the primary case market and its structure is studied in detail. A set of explanatory variable candidates is then selected accordingly, which may explain price behavior in this market. In the process of selecting the explanatory variable candidates, some important issues, such as direct or indirect effects of the variables on price behavior, availability of the variables before real-time, choice of appropriate forecasting horizon and market time-line, are taken into account. Price and demand in three neighboring electricity markets, namely, the New York, New England, and PJM electricity markets, are also considered among the explanatory variable candidates. Electricity market clearing prices in Ontario are calculated every five minutes. However, the hourly average of these 5-minute prices, referred to as the Hourly Ontario Energy Price (HOEP), applies to most Ontario market participants for financial settlements. Therefore, this thesis concentrates on forecasting the HOEP by employing various linear and non-linear modeling approaches. The multivariate Transfer Function (TF), the multivariate Dynamic Regression (DR), and the univariate Auto Regressive Integrated Moving Average (ARIMA) are the linear time series models examined. The non-linear approaches comprise the Multivariate Adaptive Regression Splines (MARS), and the Multi-Layer Perceptron (MLP) neural networks. Multivariate HOEP models are developed considering two forecasting horizons, i.e. 3 hours and 24 hours, taking into account the case market time-line and the ability of market participants to react to the generated forecasts. Univariate ARIMA models are also developed for day-ahead market prices in the three neighboring electricity markets. The developed models are used to generate price forecasts for low-demand, summer peak-demand, and winter peak-demand periods. The HOEP forecasts generated in this work are significantly more accurate than any other available forecast. However, the accuracy of the generated HOEP forecasts is relatively lower than those of the price forecasts for Ontario's neighboring electricity markets. The low accuracy of the HOEP forecasts is explained by conducting a price volatility analysis across the studied electricity markets. This volatility analysis reveals that the Ontario electricity market has the most volatile prices compared to the neighboring electricity markets. The high price volatility of the Ontario electricity market is argued to be the direct result of the real-time nature of this market. It is further observed that the inclusion of the just-in-time publicly available data in multivariate HOEP models does not improve the HOEP forecast accuracy significantly. This lack of significant improvement is attributed to the information content of the market data which are available just-in-time. The generated HOEP forecasts are used to plan the short-term operation of two typical demand-side case-study BEMCs. The first case-study BEMC is a process industry load with access to on-site generation facilities, and the second one is a municipal water plant with controllable electric demand. Optimization models are developed for the next-day operation of these BEMCs in order to minimize their total energy costs. The optimization problems are solved when considering market price forecasts as the expected future prices for electricity. The economic impact of price forecast inaccuracy on both the case study is analyzed by introducing the novel Forecast Inaccuracy Economic Impact (FIEI) index. The findings of this analysis show that electricity market price forecasts can effectively be used for short-term scheduling of demand-side BEMCs. However, sensitivity to price forecast inaccuracy significantly varies across market participants. In other words, a set of price forecasts may be considered ``accurate enough'' for a customer, while leading to significant economic losses for another.