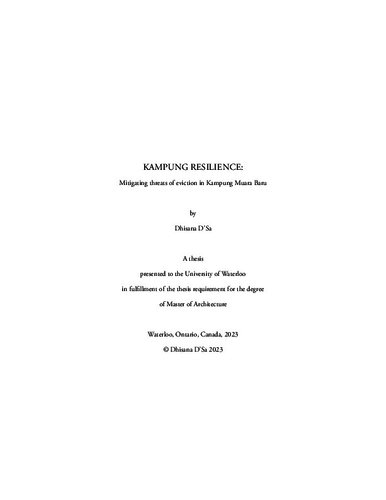 The following research investigates the National Capital Integrated Coastal Development (NCICD) master plan within the context of Muara Baru, Jakarta, as a neo-colonial practice that threatens to displace marginalized urban communities, commonly referred to as kampungs. In response, this thesis proposes small-scale, community-engaged architectural interventions to drive economic and social growth within these marginalized communities, subsequently allowing residents to counter urban displacement. The Jakartan kampung is a vulnerable housing type that has been labelled “overcrowded, unsanitary, and lacking proper infrastructure” by mainstream political and social narratives. The kampung’s stigma as a primitive settlement, one that has historically been excluded from colonial city planning initiatives, renders it a prime target for urban renewal, therefore jeopardizing the livelihoods of its marginalized residents by putting them at risk of mass forced evictions. The NCICD master plan sets a clear neocolonial precedent. The development is an engineered urban island along the Bay of Jakarta, conceptualized in collaboration with the Dutch government, with a completion scheduled for 2050. The plan attempts to address issues of flooding and land subsidence by proposing large-scale urban land reclamation and the development of a giant seawall along the northern bay. However, the design solutions proposed in the NCICD master plan fail to respond to the core challenges of rapid urbanization and unregulated groundwater extraction that greatly contribute to the degradation of land and quality of life for marginalized residents. To counter the threat of eviction, this research draws on existing design strategies to propose a prospective design framework to be implemented in Kampung Muara Baru. The proposal consists of a series of small-scale architectural interventions acting as a catalyst for community development and enhancement. This design research method involves: i) documenting and observing the existing site conditions and residents’ livelihoods; ii) documenting and observing a local precedent site, Kampung Tongkol, to understand how its residents were allowed to remain in place after the threat of eviction; iii) proposing some of Kampung Tongkol’s design strategies among others on the chosen research site; and iv) depicting these design alternatives at the scale of the single house, the community (cluster of houses), and the larger research site. These retrofits are proposed as a more considered solution to the kampung’s modern problems as they are intended to inform an argument for an improvement plan that, in contradiction to the goals of the NCICD, creates better communities for the people who currently inhabit them. This proposed solution will allow residents to remain in place while also cleaning, greening, and upgrading neighborhood fronts and structures, accomplishing the political goals and requirements of city planning policies without adding to a cycle of population displacement and underserving kampung communities.