An Archaeobotanical Analysis of the Iler Earthworks Macro Remains 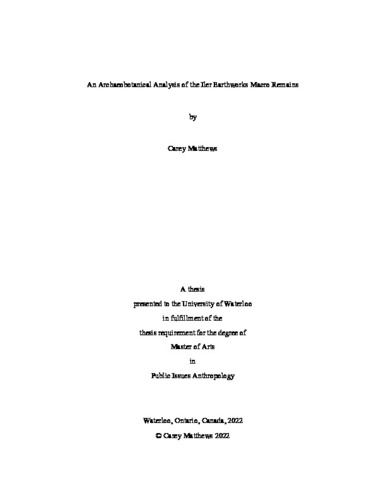 This thesis examines the archaeobotanical remains from the Iler Earthworks, a Springwells-Wolf phase site within the Western Basin Tradition (WBT) of Southwestern Ontario. Excavations between 2015 and 2018 resulted in soil samples from pit feature contexts that were floated as part of this study to collect archaeobotanical remains. Archaeobotanical data are underrepresented in Western Basin Tradition scholarship but can contribute to a better understanding of foodways and the interrelationships between humans and their environments. Subsistence strategies for WBT populations have been associated with seasonal mobility, with a low reliance on cultigens. This analysis suggests that the Iler community was engaging in cultigen use, and this is the first report where four out of five identified cultigens in Ontario are present at a WBT site. Yet, the analysis also suggests that the people of Iler remained committed to exploiting wild species. This suggests that while the Iler community was invested in horticultural practices as part of their foodways, so too were practices that emphasized gathering within the region. This may be connected to local ecological engineering practices which sought to maintain a highly diverse and rich resource environment.