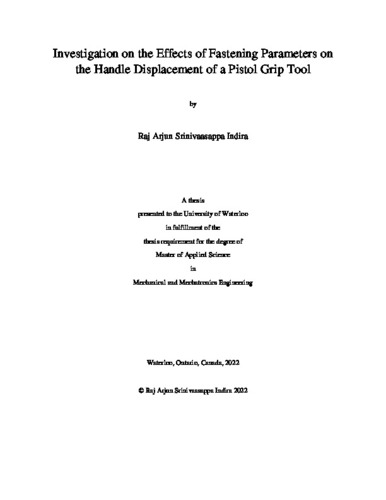 Workers in automotive assembly lines routinely use DC-powered pistol grip tools to install threaded fasteners. While these tools are easy to use and increase production quality, tool operators are subjected to impulsive reaction torques that produce forceful rotary displacement of the tool handle. While operators try to resist this reaction, forces exerted by the forearm muscles are often insufficient, thereby producing eccentric contractions. Repeated exposure to such forces is known to cause tendonitis, fatigue, and physical stress. The objective of this study was to investigate the operational parameters and optimize conditions that minimize the tool handle displacement. A deterministic approach was considered to identify the system parameters. The tool-operator system was mathematically represented using a single degree-of-freedom torsional model. An in-vivo study of 10 experienced workers was conducted to estimate the typical ranges of operator stiffness. Tightening tasks were performed at 3 torques (5, 7.5, 10 Nm), and 4 fastener locations that correspond to varying orientations of the wrist. The mean operator stiffness was found to be 1.11 kN/m. A pistol grip tool simulator was designed and developed to emulate the dynamics of tightening operation without the use of human operators. A slider-crank mechanism was considered to represent the kinematics of the torsional system, and a pneumatic actuator was used to represent individual operator stiffness. A parametric study observed the effects on tool handle response due to varying torque, operator stiffness, spindle speed, fastener material, drive style, and fastener head type. Results showed that an increase in applied torque (5–7.5 Nm) also increased the angular displacement of the tool handle (42.2°–58.5°). Variation in stiffness resulted in an inverse effect on the handle response. At 7.5 Nm, it was observed that wrist ulnar deviation produced the most handle displacement (59.2°), whereas wrist flexion produced the least (57.3°). Variation in the operational speed of tool spindle showed no significant effect on the handle displacement. Three fastener materials, alloy steel, stainless steel, and brass were tested. It was observed that alloy steel resulted in the least displacement (65.4°), whereas brass produced the most (85.7°). Between the two drive styles, it was observed that a Hex drive produced significantly higher response (69.9°) than a Torx Plus drive (63.4°). Button Head fasteners produced significantly higher response (76.2°) compared to Flat Head fasteners (66.9°). Based on this data, it was concluded that the designed pistol grip tool simulator can be used to investigate and optimize the operational parameters such as tool tightening algorithm, fastener types, and task locations, thus minimizing the tool handle displacement and mitigating forearm strain injuries.

Raj Arjun Srinivaasappa Indira (2023). Investigation on the Effects of Fastening Parameters on the Handle Displacement of a Pistol Grip Tool. UWSpace. http://hdl.handle.net/10012/19101