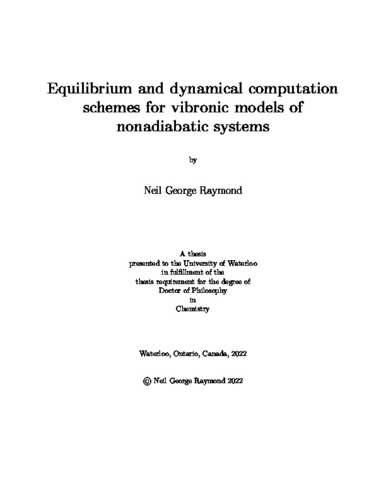 Two computational schemes were investigated for studying vibronic models of nonadiabatic systems: Path Integral Monte Carlo (PIMC) and vibrational electronic coupled cluster (VECC). A PIMC method was used to investigate the distributions of normal modes of nonadiabatic systems. The key element to this approach is the use of gaussian mixture distributions (GMD), and the evaluation of the path integral through matrix products instead of individual matrix elements. By using PIMC with a GMD-reduced scheme, we showed that it is possible to circumvent a sign-problem presented by the non-stoquastic nature of the vibronic Hamiltonian. An alternative GMD scheme was shown to be effective for systems with weaker coupling when the vibronic Hamiltonian is not non-stoquastic. In recent years a new approach, VECC, was developed, in the Nooijen group by the graduate student Songhao Bao, to describe electronic absorption spectra. The problem of determining detailed equations of motion (EOM) used in VECC was solved and implemented in a software package named termfactory. We explored a variety of ways to represent the constraints of the equations of motion for further generalization of termfactory. A particular realization of these EOM were developed and applied to produce vibrationally-resolved electronic spectra from auto-correlation functions (ACFs) by way of real-time propagation of a coupled cluster (CC) wave function whose operators are expressed in the second quantized formulation. Our implementation, called t-amplitudes, showed excellent agreement with Multi-configuration time-dependent Hartree (MCTDH) for small molecules, but with much improved computational runtimes. For a larger system, hexahelicene, we were able to replicate the overall shape of the spectra as presented in the literature.