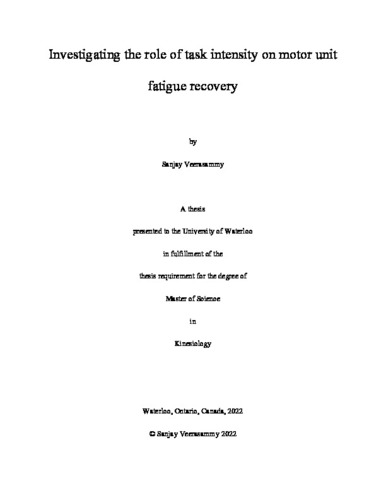 Background: It is unclear how the intensity as well as the underlying contributions of larger versus smaller motor units of a performed task impacts fatigue recovery. Therefore, I tested two hypotheses: that the normalized force response (NFR) at each time point would be greater following the high intensity versus low intensity task, indicating that recovery is greater following fatigue at a higher intensity of effort; and, that the NFR at each time point would be greater following the 100Hz stimulation compared to the 20Hz stimulation, indicating that longer term, low-frequency frequency fatigue had occurred. Methods: Fourteen males and fourteen females performed a high (70% of their Maximum Voluntary Force (MVF)) and low (20%MVF) intensity isometric elbow extension task, one week apart, until task failure. Recovery was then measured as the force from muscle electrical stimulation at high (100Hz) and low (20Hz) frequencies over one hour. Results: A three-factor repeated measures Analysis of Variance (ANOVA) found that significant interaction effects existed between intensity and time (F (6.0,162.8) = 12.94, p < 0.001, ηp2 = 0.32), and between frequency and time (F (8.64,233.29) = 6.92, p < 0.001, ηp2 = 0.20). Post-hoc pair wise comparisons to decompose the intensity by time interaction revealed that the NFR was initially higher (0-4 minutes) following the high intensity protocol relative to the low intensity protocol, but then declined and was lower (from 10-40 minutes) before returning to similar levels as the recovery time approached 60 minutes, with the NFR significantly different at minutes 35 and 60. In contrast, decomposing the frequency by time interaction revealed that the NFR remained higher from minutes 0-60 following high frequency stimulation compared to low frequency stimulation. Conclusion: From these results, I observed that that the higher intensity task caused a greater initial recovery of NFR when compared to recovery from the same task performed at a lower intensity. However, the NFR underwent a force depression following the initial recovery, such that the NFR remained significantly lower following fatigue caused by a high intensity relative to low intensity isometric contraction for up to thirty minutes following task failure. I also observed that the recruited motor units required a higher stimulation frequency to generate forces that were closer to baseline levels at the same input voltage, independent of the intensity of task performed. This indicated that long-term low frequency mechanisms characteristic of smaller motor unit fatigue accumulation may have similarly contributed to both high and low intensity fatigue recovery profiles. Overall, these findings suggest that muscle fatigue from a sustained isometric contraction may continue to accumulate even after the fatiguing stimulus has been removed. These findings also suggest that overall recovery may be driven by the amount of fatigue accumulated in smaller motor units. Both findings should be considered when informing models that measure muscle fatigue accumulation and recovery.