From Astrophysics of Galaxies to Binary Black Hole Mergers: Theoretical Modelling of the Gravitational-Wave Bias Parameter 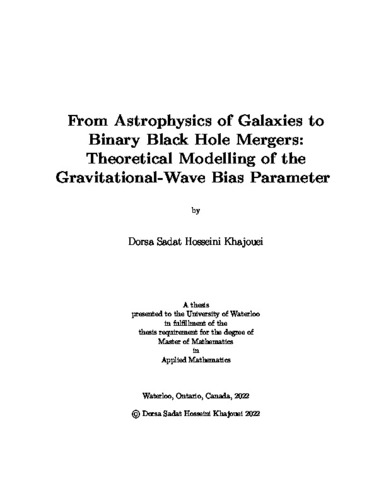 In the past few decades, the field of cosmology has become a fascinating field of study in physics. The computational advances and precision observational measurements such as Cosmic Microwave Background (CMB) measurements and the Large Scale Structure (LSS) experiments have thrust cosmology into the spotlight of modern physics. While research in cosmology explores the evolution of the universe on large scales, it is also closely connected from one end to the fundamental theories of physics such as theories of gravity and particle physics and from the other end to the astrophysical models and astronomical observations on small scales. Understanding the physics and formation of astronomical objects such stars or black holes can shed light on the physics of galaxy formation, nature of dark matter, models of gravity in strong field regime and history of the universe as a whole. In particular the detection of Gravitational Wave(GW) signals from binary compact objects since 2015 by the Laser Interferometer Gravitational-Wave Observatory (LIGO) collaboration , has opened the door to the new era of multi- messenger astronomy. Given the wealth of data we are expecting over the next few decades on this front specially including the next-generation detectors like Cosmic Explorer , and Einstein Telescope , exploring and understanding how this data with conjunction to the other astrophysical data such as galaxy surveys, can be utilized to understand the underlying physics is very crucial. The measurement of GWs is also a useful tool to understand the population of binary black holes and neutron stars and their merger rate in the universe. GW detections can also reveal the connection between the formation of binary compact objects and properties of stellar population like their brightness, star formation rate and mass . Measuring these properties based on identification of an individual galaxy host of a single GW event may be unrealistic due to the large sky localization errors (even considering the next generation of GW detectors which may reach below one squared degree sensitivities). However, a statistical inference method could shed light on these properties by taking advantage of the correlation of their distribution to the matter density and large scale structure. This requires understanding and theoretical modeling of how their population traces large scale structure for different astrophysical models. In this thesis, I will present our research on gravitational wave cosmology which lays the groundwork for one of the important aspects of these future studies: theoretical prediction of the GW bias parameter based on different choices of galaxy properties. In particular, we develop a numerical framework for forecasting the the bias param- eter for GW sources based on the observed galaxy surveys. This can provide important information about the astrophysical properties of the GW merger events, their environ- ment and can also be used for cosmological inference models. To be more specific, We will evaluate angular and 3-dimensional power spectrum and bias parameter of GWs given the parameters of astrophysical models using two galaxy surveys GLADE+ and Sloan Digital Sky Survey (SDSS) Data Release 7. Our results even though preliminary and part of a bigger program still in progress, indicate some interesting features on how the bias parameter can be impacted by properties of the galaxies such as the stellar mass, metallicity and star formation rate. It is worth mentioning that our numerical package is written such that it can easily be adopted to other galaxy surveys (photometric or spectroscopic) and accommodate different astrophysical assumptions. We are planning to make our code publicly available to scientific community in near future.