Sensory Conflict: Effects on the Perceived Onset of Motion and Cybersickness in Virtual Reality 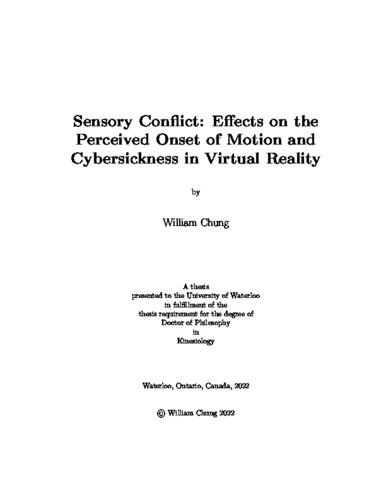 The perception of self-motion involves the integration of multisensory information, however there are scenarios in which the sensory feedback we receive from these different sources can conflict with one another. For example, when inside the cabin of a ship at sea or playing a game in virtual reality (VR), sensory signals for self-motion from the visual and vestibular systems may not be congruent. It has been well documented that such scenarios are associated with feelings of discomfort and alterations in our perception of motion, but the mechanisms leading to these perceptual consequences remain uncertain. The goal of this dissertation is to explore the effect of sensory conflict between vestibular and visual signals on the perception of self-motion and implications for cybersickness. Chapter Two examined the effect of sensory conflict on the perceived timing of a passive whole-body rotation paired with both congruent and incongruent visual feedback using VR. It was found that the visual signal only influenced the perception of movement onset when the direction of the visual motion did not match the expected equal and opposite response relative to physical rotation. In Chapter Three, the effect of sensory conflict between visual, vestibular and body cues on the perceived timing of visual motion was explored. The results revealed that changing the orientation of the body relative to gravity to dissociate the relationship between vestibular and body cues of upright delays the perceived onset of visual yaw rotation in VR by an additional 30ms compared to an upright posture. Lastly, Chapter Four investigated the relationship between sensory conflict and sensory reweighting through measures of cybersickness and sensory perception after exposure to VR gameplay. The results indicated that the perception of subjective vertical was significantly influenced by an intense VR experience and that sensory reweighting may play a role in this effect, along with providing a potential explanation for individual differences for cybersickness severity. Altogether, this dissertation highlights some of the perceptual consequences of sensory conflict between vestibular and visual signals and provides insights for the potential mechanisms that determine the perception of self-motion and cybersickness in VR.