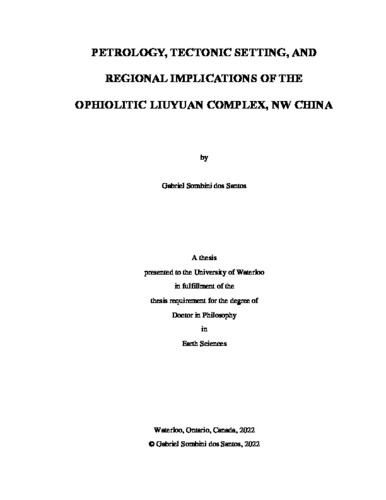 Located along the southern margin of the Central Asian Orogenic Belt (CAOB), the mafic 290-280 Ma Liuyuan Complex stratigraphy and tectonic setting have been controversial for decades. Here, the results of a detailed field and petrological study are presented, where the Liuyuan Complex is subdivided into troctolite, melatroctolite, layered gabbro, olivine gabbro, podiform olivine gabbro, podiform hornblende gabbro, intrusive hornblende gabbro, plagiogranite, sheeted dyke, and mafic tectonite in addition to previously identified and studied basalt and chert. All contacts between the igneous facies are intrusive, with gabbroic rocks separated from the overlying basalt by a newly discovered, well-developed and laterally continuous sheeted dyke complex. Based on their trace element signature and thermodynamic modeling, the basalts of the Liuyuan Complex formed by 10-17% partial melting of a spinel lherzolite mantle source in a back-arc basin setting. The parental melt of the suite followed a typical tholeiitic liquid line of descent, fractionating olivine, plagioclase, clinopyroxene, and ilmenite. Stratigraphic relations, mineral chemistry, and trace element inversions further indicate that the gabbroic rocks in the Liuyuan Complex are comagmatic with the overlying basalts. The formation of the Liuyuan Complex as a back-arc basin ophiolite is inconsistent with previously proposed tectonic models for the southern CAOB, which required the Liuyuan Complex to have formed as a continental rift or a fore-arc ophiolite. Based on recent field investigations in the Liuyuan area, a tectonic model where the Liuyuan Complex formed as a back-arc to the recently identified Ganquan Arc is proposed. The back-arc basin was then consumed by a north-dipping subduction zone beneath the active margin of Composite Siberia starting ca. 281 Ma. The magmatic center of this arc migrated southwards, likely caused by slab roll-back, with the Liuyuan Complex becoming the basement of this arc. Exhumation of the Liuyuan Complex took place by 267 Ma, marking the closure of the southernmost and youngest known tract of the Paleo-Asian Ocean.