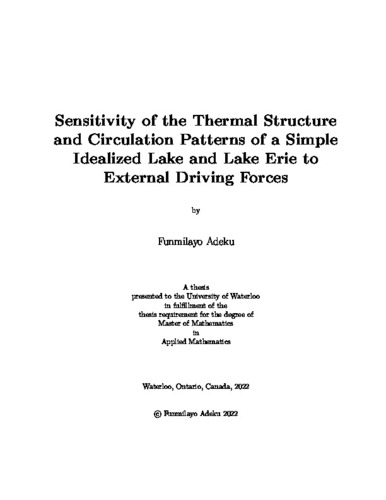 Lake Erie has been a great source of economic growth and drinking water for both Canada and the United States. All lakes in temperate regions that stratify during summer are prone to hypoxia as they will experience some degree of dissolved oxygen (DO) depletion in the hypolimnion, however, Lake Erie has been very unlucky as it experiences almost all the classes of hypoxic conditions due to its thin hypolimnion. Lately, many researchers focus on Lake Erie to understand the reasons for the abnormally large harmful algal blooms in Lake Erie and its hypoxic and anoxic conditions which has been negatively affecting its aquatic ecosystems and services, water quality, etc., which in turn has impacted the economy. Understanding the lake's thermal structure and circulation patterns are crucial for precise assessment of the water quality, physics, and biochemical characteristics, and also the effects of climate change on the lake in order to make informed management decisions. In this thesis, the 3-D hydrodynamics MITgcm was used to model a simple Idealized Lake and Lake Erie to study the sensitivity of their thermal structures and circulation patterns to different external driving forces using the two common 2-band short wave parameterizations, Jerlov IA and III and a 3-band short wave radiation model to simulate the motion. The simple idealized lake was forced with South-North linearly varying winds, long wave and short wave radiation, relative humidity, and air temperature while Lake Erie was modeled on a 500 m horizontal grid and forced with the meteorological data obtained from the National Water Research Institute of Environment Canada and the National Data Buoy Center for year 2008. The model results from simulating the simple Idealized Lake (the modeled current in the upper layer) has a good agreement with the analytical results, this confirms the robustness of MITgcm model. Our work suggests that the 2-band model (Jerlov IA and III) produced less warm water in the shallow areas than the 3-band model especially during summer period where it (the 3-band model) overestimated the water temperatures, thus, we suggest that the 3-band model should only be employed when modeling deep lakes for accurate predictions of the thermal structure. We also found out that the overly warm water in lakes is due to solar radiation (short wave and long wave radiation) and not the air temperature and the inflow water temperature forcings e.g.~(1)the water in the Idealized Lake warms up quickly when we modeled with no shortwave radiation but with long wave and cools down faster when modeled with no long wave and no shortwave and (2) the effects of the changes in external forcings in some of our model have slight influence on the thermal structure at 20 m depth and no impact at 1 m and 10 m depths in the eastern basin and central basin (image not shown).