Development of a Magnetic Levitation System for Additive Manufacturing Processes 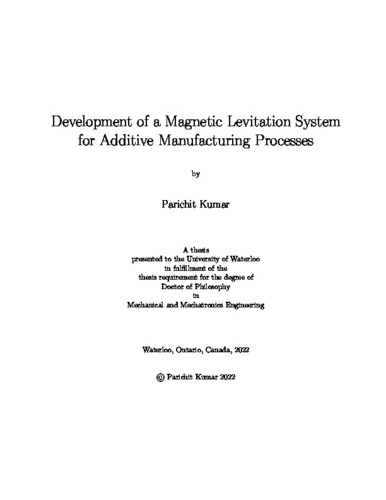 Magnetic levitation and Additive Manufacturing (AM) are both highly innovative fields that have changed the trajectory of development within a wide variety of applications. Magnetic levitation techniques offer noncontact levitation forces that highlight high compatibility with metal AM operations like Laser Directed Energy Deposition via Powder Feeding (LDED-PF) techniques. The research presented in this report aims to highlight the novel implementation of a magnetic levitation system compatible with LDED-PF operations. The suspension of a conductive paramagnetic material geometry through repulsive magnetic levitation techniques will serve as the substrate to build a part through LDED-PF operations. The research contributions are as follows: First, this research develops a novel magnetic levitation system capable of supporting AM operations. The compatibility of the levitation system has been tested through simulations and experiments. Second, the levitation system can support time-varying loads over time without losing stability during AM operations. Finally, a novel parameter to determine the compatibility of different paramagnetic materials with magnetic levitation applications was developed and verified through this research. Two magnetic levitation systems were developed. The first system was composed of a laminated core. This entailed the use of several hundred sheets assembled together to form the core within which the coils were embedded. This resulted in a reduction in eddy current losses within the core, however, the sheets sizes were predefined which resulted in the loss of flexibility for optimization. The second system was composed of a solid core system. This system was subjected to higher eddy current losses, however, offered significantly higher flexibility for optimization. The prototypes were optimized, manufactured, assembled, and tested. Both prototypes successfully highlighted the ability to levitate aluminum discs. Following the successful development of the levitation system prototypes, the next step was the development of a feedback controller to facilitate stable suspension at the desired setpoint. Through the incorporation of a simple Proportional Integral and Derivative (PID) controller using a laser sensor, the rise time was improved. However, a significantly high settling time was still encountered. To overcome this, a PID controller with a compensator component modeling the anticipated initial value of the voltage input was incorporated into the feedback PID controller. Through the implementation of the PID controller with the compensator component, the overshoot was eliminated and the settling time was reduced by 3.9 s. Subsequently, the performance of the levitation system was tested without a feedback controller within the LDED-PF machine experimentally. Copper alloys were deposited on an aluminum alloy build surface that was levitated. Under a high powder feed rate and high laser power, the levitation system was successfully able to support powder deposition activities. The build surface for powder deposition was also maximized through the incorporation of the levitation system within the AM machine. Finally, this research also develops a parameter set that utilizes the material properties of different paramagnetic materials to determine their compatibility with magnetic levitation techniques. Conventionally, there is a strong reliance on the use of experimental implementation to determine whether a material is compatible with magnetic levitation techniques. However, by comparing the ratio of electrical conductivity to the density of the material, the compatibility of the material with magnetic levitation techniques can be determined without any experimental implementation.