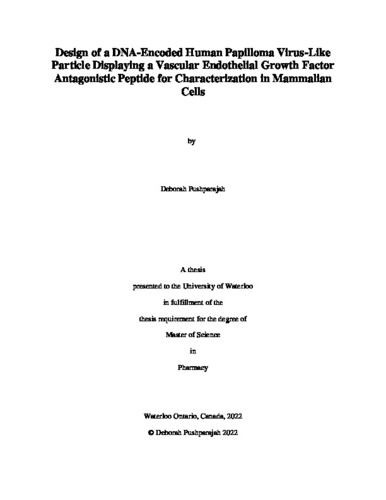 Cancer immunotherapy has evolved as an effective platform for the treatment of a variety of cancer types by enhancing and/or modulating the functionality of the immune system to target cancer cells and consequently mitigate tumour growth. Within the last decade, self-assembled viral-derived protein complexes, known as virus-like particles (VLPs), have been extensively studied for their application toward cancer immunotherapy. These structural viral-mimicking particles possess the capability to engender potent immune responses, and in doing so, combat the immunosuppressive tumour microenvironment. VLP-based vaccines have been commercialized, however, VLPs encoded as a genetic sequence, such as a DNA-VLP strategy, for delivery and subsequent in vivo formation, has not been licensed to date. This would enable transcription and translation of the introduced genetic sequence into viral structural proteins, assembly of the expressed proteins to form VLPs, and successive immune response stimulation, characterizing this type of treatment modality as both an immunotherapeutic and gene therapeutic. Delivery of VLPs encoded as a genetic sequence, opposed to conventional VLP delivery, enables viral structural protein expression and assembly into VLPs directly within cancer and immune cells, promoting enhanced cell-mediated immune responses, which can contribute to a greater extent towards tumour eradication. Here, we are seeking to apply this concept toward the design of a DNA-VLP gene cassette to produce human papillomavirus (HPV) 16 VLPs as a gene therapy-based cancer immunotherapeutic. The DNA-VLP gene cassettes were designed to encode the major capsid protein of HPV16, known as L1, along with an inserted peptide. This peptide, known as VGB, is characterized as an anti-angiogenic molecule that has previously demonstrated active reduction of cancer cell proliferation and tumour growth. Transfection of the designed DNA-VLP gene cassettes was conducted within mammalian cells, which successfully encoded the HPV16 L1 protein, in addition to possible in vitro assembly of VGB-displaying HPV16 L1 VLPs. This was validated via western blot analysis, enzyme-linked immunosorbent assay experimentation, and visualization using transmission electron microscopy. Potential display of the VGB peptide within surface exposed regions of the VLPs was observed by increased binding towards VGB’s targeted receptor, VEGFR. The prospective for cell lysis contributed by the accumulation of VLPs within mammalian cells was not validated, as decreased cell growth and viability subsequent to transfection were not observed. Overall, the characterization of VGB-displaying HPV16 L1 VLPs encoded within the designed DNA-VLP gene cassettes, promotes further investigation to employ this as a potential gene therapy-based cancer immunotherapeutic for future clinical applications.