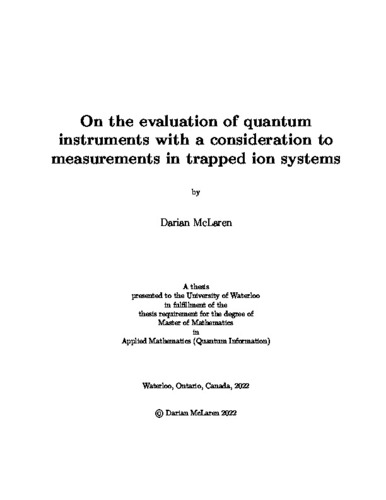 Trapped ion chains have shown promise in their application as quantum simulators. However, the close proximity of ions in the trap leads to operations such as state detection causing loss of coherence of other ions due to imperfect beam addressing and absorption of scattered photons during neighbouring ion fluorescence. In the first part of my thesis I consider a Ytterbium 171 ion trap and calculate the probability of neighbouring ion photon absorption. I additionally show how to use the Lindblad master equation to simulate the dynamics of an ion under an attenuated beam, and provide a review of determining the detection fidelity through histograms of photon detection counts. I then return to the more abstract setting of non-destructive quantum measurements, which are instrumental for fault-tolerant quantum computers. These non-destructive quantum measurements have both a quantum and classical output and hence must be described through a quantum instrument as opposed to the typical representation of measurements through POVM's. It therefore becomes necessary to develop methods for evaluating quantum instruments. In this thesis I show that the process fidelity and diamond distance as figures of merits on unitary channels may be generalized to figures of merits on quantum instruments. I show that these figures of merit adequately capture the errors associated to non-destructive measurements, and they additionally provide upper and lower bounds for each other. Several examples are also given of computing the figures of merit on quantum instruments under various noise models.

Darian McLaren (2022). On the evaluation of quantum instruments with a consideration to measurements in trapped ion systems. UWSpace. http://hdl.handle.net/10012/18974