Phantoms of the Sea: Phokaian Colonies of the Far Western Mediterranean 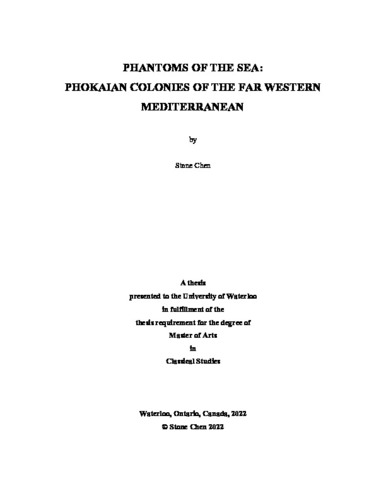 Phokaian settlement and expansion in the western Mediterranean constitute an integral and distinctive part of the broader phenomenon of Greek colonization in the Archaic period, yet many aspects of Phokaian colonization in this region remain relatively understudied. In particular, the question of exceptionality continues to attract debate and controversy: did the colonial practices of the Phokaians in the west significantly differ from all other Greek metropoleis? This thesis looks first and foremost at the conceptual problem of applying colonial terminologies, shaped by the early modern experience, to the ancient phenomenon. A fresh analysis of the problem suggests that their usage is still advised, though with caution and acknowledgement of their inherent vulnerability to be misused and misunderstood. Next, a general survey of Phokaia and its history of colonial endeavours is followed by case studies of two of the most important Phokaian sites: Massalia and Velia. Through a close analysis of both literary accounts (e.g., founding legends) and archaeological evidence, it is possible to delineate a clearer picture of the process of foundation and identify a more coherent paradigm of conflicts, interactions, adoptions, and exchanges between the Phokaians and their indigenous neighbours. In doing so, the question of Phokaian exceptionality is rendered partially irrelevant owing to the observation that commonality and uniqueness were simultaneously present both among Phokaian colonies and between Phokaian and other Greek settlements.