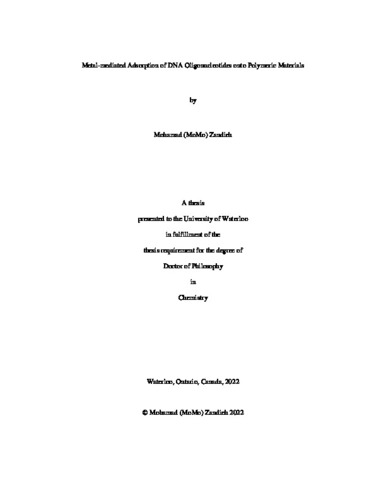 In recent decades, DNA oligonucleotides have been extensively researched due to their applications for catalysis (DNAzymes), biosensing (DNA aptamers/Watson-Crick hybridization), and nanomaterials assembly (DNA origami). An important aspect is to form DNA/nano hybrids, where nanomaterials can serve as DNA carriers, fluorophores and fluorescence quenchers, magnetic separation and enrichment, and other purposes. Most previous work focused on inorganic nanomaterials, especially gold, carbon-based nanomaterials and metal oxides, whereas work on polymeric nanomaterials was less explored. In this thesis, we interface DNA oligonucleotides with two important polymeric materials: polydopamine (PDA) and microplastics. We investigate the metal-mediated adsorption of DNA on these materials to understand the nature of interactions. These two polymers are important from different aspects. On one hand, PDA is a biocompatible, versatile, and universal coating material. Therefore, by coating any surface with a thin layer of PDA and comprehending PDA interactions with DNA, we can provide DNA functionality on various nanomaterials. A wide range of biomedical applications can benefit from this. On the other hand, in recent years, microplastics pollution has been highlighted as a serious threat to ecosystem. Investigation of DNA adsorption on microplastics provides insights to comprehend the nature of interactions between environmental DNA and microplastics. Moreover, it paves the way towards selection of DNA aptamers for microplastics. In Chapter 1, background information about DNA, PDA, and microplastics is presented, the current literature about PDA-DNA and microplastics-DNA interactions is reviewed, and the outline and goals of this thesis are introduced. In Chapter 2, polyvalent metal ions are used during PDA synthesis to prepare metal-doped PDA nanoparticles (NPs), and we use these NPs for DNA adsorption for the first time. It is found that the metal-doped PDA NPs adsorb DNA with higher capacity and tighter binding compared to metal-adsorbed PDA NPs. The metal-doped PDA-DNA conjugate has a remarkable stability in biological media such as serum and PBS. Considering the improved selectivity and robustness, the metal-doped PDA NPs are found to be the better candidate for designing fluorescent-based DNA sensors compared to metal-adsorbed PDA NPs. In Chapter 3, the adsorption of SNA and linear DNA on PDA NPs is compared and the cooperative effect of metal ions for promoting SNA adsorption is illustrated. Then based on the extraordinary stability of PDA-SNA conjugate, a hybrid material is designed for DNA extraction and detection. The hybrid materials consist of a Fe3O4 core (to provide magnetic separation), a PDA shell (to achieve specific DNA extraction) and a SNA decoration (to achieve efficient hybridization of target DNA). Therefore, selective and highly robust extraction and detection of DNA is achieved. In Chapter 4, the adsorption of linear DNA and SNA onto the most common microplastics is systematically studied for the first time. Metal-mediated interactions are found to be vital for DNA adsorption onto microplastics. Among the environmentally abundant metal ions, Ca2+ and Mg2+ show a higher efficiency than Na+ for promoting the adsorption. Among the microplastics, PET and PS show higher DNA adsorption efficiency than PE, PP, and PVC. It is likely that the aromatic groups of PET and PS provide extra interactions for a more stable adsorption. Hydrogen bonding also is found to be important for such adsorption. In Chapter 5, the strong SNA adsorption is applied to reveal the difference between fresh and water-stored microplastics. SNA adsorption is enhanced on the water-stored microplastics. However, the spectroscopic data suggest that these microplastics are the same in terms of surface chemistry. Therefore, the difference is because of the change of wettability of microplastics which is observable in the floating behavior of microplastics as well. Likely, due to microplastics storage in water, the surface the surface roughness features become wet allowing a more efficient SNA adsorption. Therefore, SNA adsorption is proposed as a simple technique to probe the degree of wettability of microplastics. The main original contributions of this thesis include the use of surface science approaches to study the adsorption of DNA; the focus on the effect of metal ions for DNA adsorption; and the understanding of DNA adsorption forces on these polymeric materials.