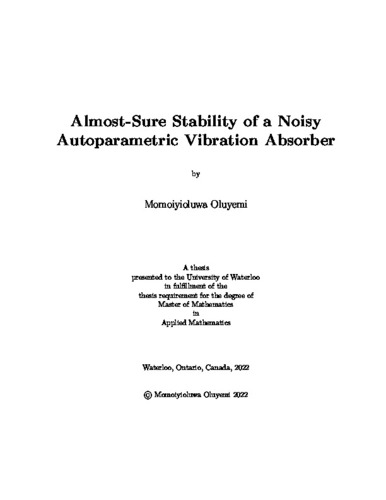 This thesis investigates the almost-sure stability of the single mode solution of a two degree-of-freedom, noisy, nonlinear autoparametric system. While only the first mode is forced in such a system, the nonlinear coupling often transfers energy to the second mode. Equations of motion of autoparametric systems model the dynamics of a number of structural and mechanical systems, such as, a randomly excited and initially deformed shallow arch, a suspended elastic cable driven by planar excitation, or a vessel subject to longitudinal wave action. To keep things as simple as possible, we consider a very simple system, namely, a type of autoparametric vibration absorber with randomly excited base - a pendulum attached to a mass-spring oscillator. Under the assumption of small random perturbations and small damping, the maximal Lyapunov exponent which determines the almost-sure stability of the single mode solution is calculated. Putting the maximal Lyapunov exponent to zero provides the second-order approximation of the almost-sure stability boundary in terms of the excitation intensity and the dissipation coefficients. A plot of this stability boundary reveals several trends of practical importance to engineering applications.