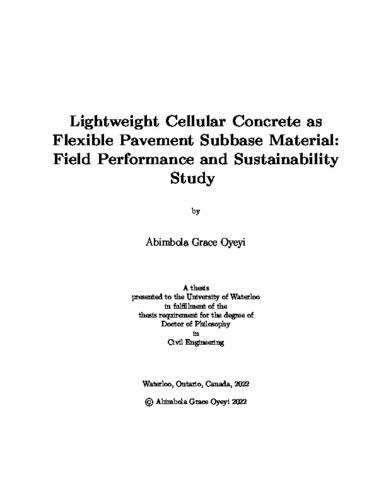 Enhancing the long-term performance of road infrastructure is an important goal for engineers in Canada, especially with changing climatic conditions. This has brought about varying approaches in design and construction techniques with alternative materials. Some factors considered in selecting these materials include advantages in terms of sustainability, lower costs, ease of construction, and increased structural capacity. Lightweight Cellular Concrete (LCC) is one such material that could be a viable option in Canada, where the pavement structure is subject to the freeze-thaw effect yielding weaker subgrades. Previous research acknowledges that as a subbase material, it could yield promising results as it has shown good freeze-thaw resistance, ease of placement as it is semi-liquid, and potential sustainability benefits such as the reduction in the use of virgin materials through the usage of industrial by-products, less pollution, and lower lifecycle costs. However, there is a need to quantify these benefits and develop unified standards and specifications for using this material in the pavement structure in Canada. This study evaluated three densities of LCC with two production methods (wet and dry mix) in terms of constructability, field performance, and sustainability. This involved pre and post-construction monitoring of test and Control sections to evaluate the performance of the LCC layer. Two test sections were built in Waterloo, Ontario. One of the trial roads (Erbsville) incorporated 250 mm and 350 mm of 475 kg/m³ LCC as subbase material and compared it with a Control constituting of 450 mm granular B subbase. The second test section (Notre Dame Drive) employed 200 mm LCC with densities of 400, 475, and 600 kg/m³ compared with a 150 mm granular A subbase. Constructability evaluation involved field testing, onsite, and instrumentation monitoring during construction. Field performance tracking was achieved across varying climatic conditions using pre-installed instrumentation to monitor stress and strain responses, layer temperature, moisture, and LCC maturity. Precipitation and ambient temperature conditions were monitored using a weather station at both field test locations. Also, pavement material properties from the field sections were tested at the CPATT laboratory. The tests performed included dynamic modulus for the asphalt concrete, unconfined compressive strength, modulus of elasticity and Poisson’s ratio, and water absorption tests for LCC, California Bearing Ratio (CBR) test for the pavement unbound layers. Furthermore, stiffness and structural capacity were evaluated using the Falling Weight Deflectometer (FWD) and Lightweight deflectometer. Roughness assessment was done with SurPro and Dipstick equipment. Regular visual inspections were conducted to capture distresses on the pavement sections. Finally, Lifecycle Assessment (LCA) and Lifecycle Cost Analysis (LCCA) were performed to quantify economic and environmental outcomes compared with current industry standards. The results revealed that applying a Lightweight Cellular Concrete subbase within the pavement structure is a feasible alternative to traditional subbase material, especially when subgrade insulation is required and weak subgrades are encountered. It showed that excessive vehicles and trucks over the LCC pavement sections before asphalt paving could be detrimental to LCC pavement performance by inducing higher stresses and strains. Lightweight Cellular Concrete with densities between 400 and 600 kg/m³ has excellent insulation properties within the pavement structure. It can reduce subgrade pressure due to traffic by up to three times compared to unbound granular material and strain responses by four times. These attributes were seen to increase with an increase in density. Layer temperature and moisture were influenced by ambient temperature and precipitation events and, in turn, influenced pavement stress and strain responses. A structural coefficient of 0.22 was determined for 475 kg/m³ and proposed as a benchmark for designing LCC pavements with a density between 400 and 600 kg/m³. Lifecycle assessment results showed that LCC pavements could lower environmental costs by reducing total life CO2 emissions by up to 16% while significantly reducing the environmental impact of SO2, CO, NOx, PM10, and total PM compared to unbound granular pavements. Environmental impact was seen to increase with an increase in LCC density. Total life costs of the LCC sections were 10% to 13% more than pavement sections with granular A and 4% to 6% more than granular B pavements. However, when only the initial construction and maintenance phase were considered, the LCC sections were 3% to 6% less expensive than the granular A pavement and 9% to 12% less than the granular B pavement. The 400 and 475 kg/m³ LCC pavements had comparable costs. This study provided an understanding of the pavement behavior of lightweight cellular concrete subbase and developed pavement layer temperature regression models for LCC and unbound granular subbase pavements with very good predictability. It presents a way to assess LCC pavements' environmental and economic impacts and recommends design, construction specifications, and guidelines for using lightweight cellular concrete subbase within flexible pavements.