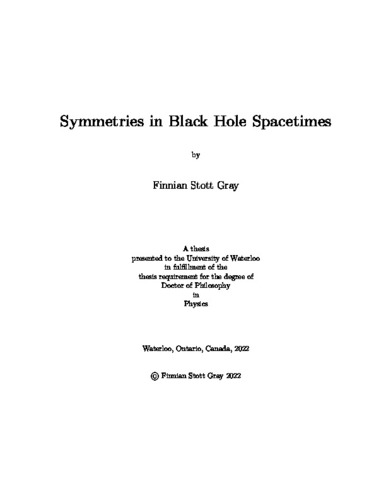 This thesis covers the role of explicit and hidden symmetries in some selected topics on the properties and excitations of black hole spacetimes. To this end, the symmetries of classical physics in Lorentzian manifolds are reviewed. In particular, explicit and hidden symmetries are presented from the Hamiltonian phase space perspective, and then, their role in the separability and integrability of geodesics and field equations is covered. Next, I present some applications of hidden symmetries and separability of fields on black hole backgrounds. Specifically this is divided into three parts. First, the intrinsic separability of the conformal wave equation is characterized for the entire conformal class of Kerr--NUT--(Anti)-de Sitter spacetimes in all dimensions. Second, the separability of the Maxwell and Proca equations is demonstrated two examples of spacetimes, beyond general relativity, which posses these hidden symmetries. The results are applied in the four dimensions, to compare the unstable quasi-normal modes of the Proca field in the Kerr--Sen example to that of ordinary Kerr--Newman black holes of general relativity. Third, I present a new class of slowly rotating black holes which can be applied to many theories beyond general relativity and are the first physically motivated example of spacetimes which posses more hidden symmetries than explicit. Finally to conclude, I very briefly mention some possible future directions for separability of physical equations and fields in rotating black hole spacetimes.