Food insecurity in a tobacco growing region in Zambia 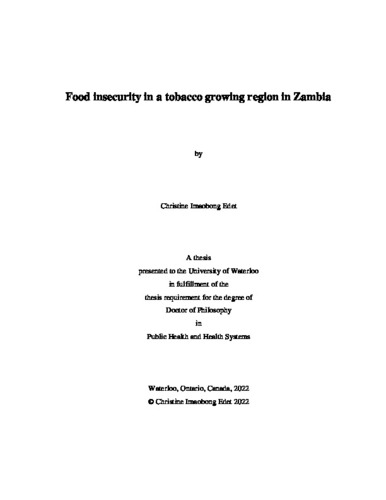 Given increasing pressure from transnational corporations to increase tobacco production in sub-Saharan Africa, especially in contexts where food insecurity is prevalent, this study contributes to our understanding of how growing this crop affects food production and women’s well-being in sub-Saharan Africa. The study characterized food insecurity and described gender inequalities in the context of smallholder tobacco growing with a specific focus on the different responsibilities of women and men for household food access. The complex nature of the food insecurity and tobacco growing relationship required using mixed data to explore processes at global, national, subnational, and household scales. Tobacco growing has been proffered as a means of alleviating rural poverty. While food insecurity was not associated with whether or not a farmer grew tobacco in this sample, factors related to tobacco growing are implicated in the social production of food insecurity by diverting labour away from crops that promote food and nutrition security. Farmers and other community members expressed concerns about the viability of tobacco growing livelihoods, owing to the oppressive nature of tobacco growing contracts, plus the labour intensity, nutritional, environmental, and social stresses associated with tobacco growing. The study also found that patriarchal norms and customs interact with intra-household cooperation norms to influence how household labour is allocated to agricultural activities and income is allocated to food and non-food needs. Furthermore, because of this interaction, women suffer negative social and health consequences, as evidenced by persistent restrictions on their autonomy, poorer nutritional status, and the persistence of cultural and social processes that increase the risk of gender-based violence. Transformative policy interventions must strengthen or re-design existing national programs of support for rural, smallholder farmers to raise incentives for farmers to grow food. These interventions must also account for how women’s options are affected by household co-operation norms.