Stand Fast for Peace & Freedom: A Study of Foreign Policy of the British Labour Party in Opposition 1931 to 1940 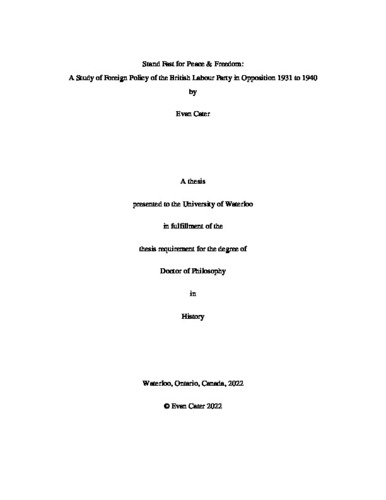 This thesis examines the evolution of foreign policy within the British Labour Party during its years in opposition from 1931 to 1940. It argues that Labour policy was locked in a bitter divide between idealist and pragmatic forces who both sought a foreign policy which could effectively counter the spread of fascism. In 1933 Labour had a radical turn towards a policy of war resistance and abandoned hope in multilateralism after witnessing the failure of the World Disarmament Conference. Labour would undertake a long and difficult process of gradually shifting away from this radical turn first by trying to revive its faith in collective security through the League of Nations and later by accepting rearmament and a return to the traditional balance of power system. Labour policy reached a turning point in 1938 when it found an honourable cause to defend Czechoslovakian democracy from the reach of Adolf Hitler. It was able to galvanise cross-party support and generate significant public sympathy for its hostility to Neville Chamberlain’s policy of appeasement. This stand against the Prime Minister, while unsuccessful, laid the foundation for Labour to return to Government in 1940 during a period of national emergency. The lessons learned from these experiences allowed the Party to help shape the postwar world after it secured a majority Government in 1945.