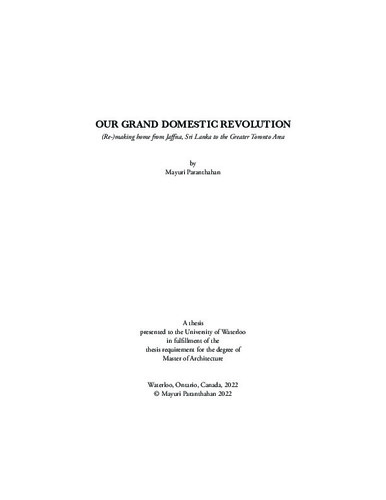 Displacement is seemingly irreconcilable with the grounding quality of domestic space; however, the practice of housework and homemaking allows forcibly displaced people to reconstruct home elsewhere. Centring the context of migration, this thesis analyzes the makings of home upon displacement as experienced by my family, who were uprooted from a Tamil village in Jaffna, Sri Lanka to the suburban Greater Toronto Area (GTA) in Canada from the onset of the 26-year Sri Lankan Civil War in 1983. Using five family homes as case studies and drawing from oral history interviews and secondary social and spatial theories, the research explores how the built environment organizes oppressions in housework practices, and how my family continues to make home within the spatial constraints. Historically, North American feminists have advocated for a radical socialization of housework in an effort to value domestic labour and extend its visibility to the public realm. This is evident in urban historian Dolores Hayden’s 'The Grand Domestic Revolution' (1981) which archives proposals by late 19th-century material feminists in America for transformed homes, neighbourhoods, and cities equipped with communal kitchens, laundries, dining halls, childcare centres, and other collectivizing strategies. Lacking in this approach to socialize housework, however, is the consideration of housework as necessary subaltern placemaking for racialized people living in a world ‘made white,’ or a world shaped by histories of colonialism (Ahmed 2007). This thesis, entitled ‘Our Grand Domestic Revolution,’ turns to a personal family history in search of more inclusive models for housework’s liberation. By spatially analyzing my family’s informal housework practices, I reveal how space can foster subjectivity for newcomers. This re-frames housework not solely as a source of oppression, as perceived in the Western feminist discourse, but simultaneously as an act of resistance through the making of an affirming domestic space for racialized refugees and their children. The findings reveal how the architecture and urban design of homes in the GTA, influenced by ideals of whiteness, become tools for negotiating insecure identities upon and after displacement. The application of these findings by designers (architects, urban planners, policy makers, etc.) can point towards alternative spatial frameworks that culturally re-value housework and allow liberation to be fostered at home.