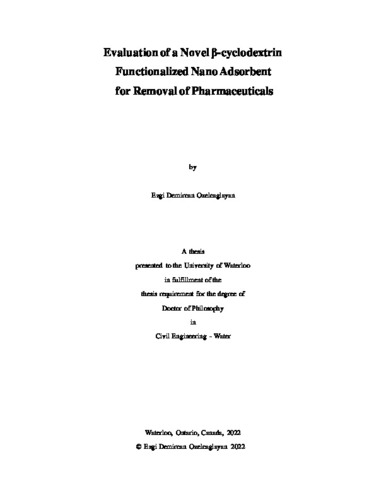 β-CD functionalized adsorbents have increasingly been reported for the removal of organic micropollutants. They have been considered attractive due to the hydrophobic cavity of β-CD which provides non-covalent interactions with small organic molecules described as host-guest complexation. The reversible non-covalent interactions allow the desorption of organic micropollutants, therefore, making them promising for reuse in adsorption. Despite the literature on host-guest complexation of pharmaceuticals with β-CD and β-CD derivatives, their adsorption via β-CD functionalized adsorbents has received little attention. The adsorption mechanism has usually depended on the physicochemical properties of the organic micropollutant. However, there has been insufficient information on the adsorption of target pollutants as a mixture and at an environmentally relevant concentration. Further, the capture and recovery of the β-CD functionalized adsorbents need to be quantified to provide insights into their reuse potential. The goal of this study was to address these gaps by evaluating a novel β-CD functionalized magnetic nano adsorbent that was developed for the adsorption of pharmaceuticals. The adsorption of a target list of pharmaceuticals that span a range of physicochemical properties was investigated. The solid phase concentration of ibuprofen was elevated when the solution pH was lower than the pKa of ibuprofen as the hydrophobicity was increased. The presence of calcium ions enhanced the adsorption of ibuprofen as the surface charge of the model adsorbent was reduced. Hence, it was revealed that the surface characteristics of the adsorbent significantly impact the adsorption and the modifications on β-CD needs further investigation at the molecular level. The adsorption of the target pharmaceuticals was assessed as a mixture and at an environmentally relevant concentration to gain insight into the partitioning. It was found that the molecular geometry of the pharmaceuticals altered the partitioning when they are present as a mixture. Naproxen with a planar molecular geometry provided the highest partitioning (0.4 mg/g) while sulfamethoxazole yielded the lowest partitioning with a bent geometry (0.1 mg/g). However, no trend was observed with respect to the hydrophobicities of the target pharmaceuticals. The results suggested that partitioning should be investigated at the molecular level to gain insight into the adsorption mechanism. The partitioning of the target pharmaceuticals onto the β-CD functionalized nano adsorbent was investigated at the molecular level to understand the impact of modifications on β-CD on the host-guest interactions. This approach has been rarely employed in the investigation of β-CD functionalized nano adsorbents. The reactivity of the selected β-CD derivatives was investigated via molecular electrostatic surface potential mapping. It was shown that the reactivity of the β-CD derivatives was altered when the substitution degree of the modified β-CD or the type of grafting agent was changed. Further investigation of the average substitution degree of β-CD via molecular simulations revealed the presence of free carboxyl (-COOH) groups that changed the reactivity and hence resulted in repulsive interactions with ibuprofen around neutral pH. The results assisted in explaining the effect of pH and cations on adsorption obtained in the experimental study. This study also showed that the effect of cations on adsorption will depend on the type of grafting agent employed in the development of the β-CD functionalized nanocomposites. The impact of the physicochemical properties of the adsorbates was investigated via molecular dynamics of selected-host guest complexes. The molecular dynamics simulation showed that the positively charged target compound yielded the most stable complex (-75.9 kcal/mol) which was in agreement with the electrostatic molecular surface potential mapping. The grafting agents that have aromatic rings have been shown to provide additional electrostatic interactions where π- π were demonstrated by the distance between the aromatic rings of the host and the guest. Hence, this method provided insights into specific non-covalent interactions between the adsorption site and the target pharmaceutical. Further, the complexation of fulvic acid with the selected β-CD derivatives was demonstrated for the first time which helped to understand the competition with the target pharmaceuticals for the adsorption site. Overall, this study employed a molecular-level investigation for the first time to investigate the impact of the physicochemical properties of target organic micropollutants on adsorption. The magnetic properties of the β-CD functionalized adsorbent provide ease of separation and in this study, a high gradient magnetic separator was evaluated for the capture and recovery of the novel β-CD functionalized adsorbent. Turbidity was introduced as a method that is fast and reliable to track the mass of nanoparticles with R2 values of at least 0.99 for the low and high concentration ranges. This relationship was employed to quantify the performance of the system with respect to capture and recovery efficiency. A multi-layer steel wool placement provided 98% capture efficiency when compared to a typical placement that yielded 30% capture efficiency. It was also found that flow velocity was the significant factor impacting the capture and recovery of the adsorbent. Overall, 90% capture and 60 % recovery efficiencies were achieved at 2T and 0.22 ml/s. Further, the impact of HGMS on the size distribution of the particles showed that large-size particles were selectively captured and recovered. Preferential capture might be a limitation in the long-term utilization of the particles as the adsorption capacity can be reduced, yet it can be advantageous for lab-scale method development for preconcentrating the pharmaceuticals.