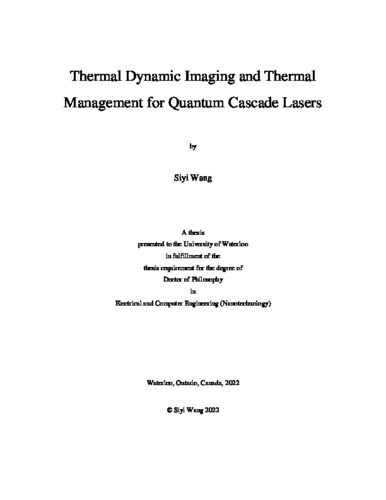 Recent advances in quantum cascade lasers (QCLs) development are pushing lasing performance towards higher output power, higher operating temperature, and higher wall-plug efficiency (WPE). However, joule heating and insufficient heat dissipation are the main issues limiting QCLs towards higher lasing performance, especially when the devices are operating on continuous-wave (cw) mode. For mid-infrared (MIR) QCLs, although the record high WPE has been achieved up to 31% on pulsed mode and 22% on cw mode at room temperature (RT), the devices still emit more heat than light. For terahertz (THz) QCLs, the maximum operating temperature (Tmax) on cw mode is 129 K, much lower than 250 K, the Tmax on pulsed mode operation. As a result, to understand the thermal dynamics and to optimize the thermal management to further improve QCLs lasing performance are highly requisite. In order to better understand the internal heat dynamics of such laser devices, it is requisite to directly observe the transient temperature profile on device’s active region (MQWs heterostructure), where heat is generated and dissipated in the surrounding medium, providing insights based on where the best strategy on device thermal management can be found. However, early works on direct observations of temperature imaging profiles on QCLs are still insufficient and limited by accurately monitoring the thermal dynamics in high spatial and temporal resolution simultaneously. Recently, CCD-based time-domain thermoreflectance (TDTR) microscopy have been employed to monitor pulse injected MIR QCLs. This technique provides a non-intrusive methodology capable of measuring real-time two-dimensional (2D) temperature profiles measurements with high temporal and spatial resolution simultaneously. In this study, a series of transient temperature imaging profiles of an actively biased ridge-waveguide MIR QCL were obtained with ultrafast temporal resolution down to 50 ns and sub-micrometer spatial resolution down to 390 nm simultaneously at RT. This study reveals that heat accumulates and temperature starts to rise in device’s active region up to ~100 degree above RT within 500 ns under a short pulsed high current injection (~112W of peak power injection, I=6A, V=18.7V). Further study reveals that, with epi-side up mounting strategy, within 1-2 µs, the heat dissipation to the top cladding layer is substantially suppressed, and most of the heat is drained to the substrate through the bottom cladding layer. This insufficient heat dissipation eventually leads to thermal-induced lasing quenching after 2 µs, which is also confirmed by combining light-current-voltage (L-I-V) measurements and theoretical thermal modeling. In addition, localized joule heating on the laser facet is detrimental to MIR QCLs when long-term operation and reliability are requisite in high output power applications. In this study, reversible lasing performance degradation is investigated on an uncoated actively- biased GaAs/Al0.45Ga0.55As mid-infrared quantum cascade laser (MIR-QCL) facet. The surface temperature rises (T) on the MIR QCL are characterized before and after the device undergoes an accelerated aging burn-in test, followed by hydrogen plasma treatment. The data is visualized by spatially resolved time-domain thermoreflectance (SR-TDTR) microscopy. On the laser facet, T decreases with a drop in lasing performance and T increases with an increase in lasing performance. Along the laser cavity, the thermal property change is negligible before and after the aging test, independent of the optical performance change. The results verify that thermal-induced facet oxidation is the main reason for the rapid degradation of the lasing performance in the early aging stage. Another primary work is to develop novel thermal management strategy for THz QCLs towards higher operating temperature on cw mode. In this work, a new technique has been proposed and developed by using hybrid integration of THz QCLs on hetero-substrates, rather than conventional MM bonding on GaAs receptor. The selected hetero substrates are with higher thermal conductivity and lower coefficient of thermal expansion (CTE) mismatch compared with GaAs based THz QCLs, providing superior heat dissipation properties and facilitates photonic integration. The results show that the maximum operating temperature of transfer bonded THz QCLs on AlN is 97 K which is comparable with 100 K by conventional metal-metal (MM) waveguide on GaAs receptor carrier in a short pulse injection (pulse width of 250 ns). In addition, pulse duration dependent L-J-V measurements show the normalized light intensity (light intensity per pulse width) drops much faster for THz QCLs on GaAs compared to THz QCLs on AlN substrate at higher heat sink temperature (e.g., 80 K), and it eventually leads to lasing quenching when the pulse duration above 30 s at 80 K, which could be attributed to joule heating. These results indicate that THz QCLs in MM waveguides hetero bonded on AlN perform efficient heat extraction and dissipation, which is promising for breaking the Tmax towards CW operation.