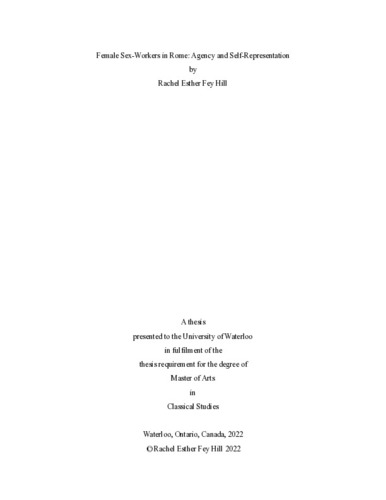 This project addresses the notion that female sex-workers at Rome wore the toga. The toga was a symbol of masculine responsibility, authority, political involvement, and citizenship. Focusing on legal, literary, and material evidence from Rome’s late Republic to early Imperial period, this investigation primarily uses an intersectional feminist lens to examine the ways in which female sex-workers exercised agency. We examine first the legal climate in which sex-worker and clothing existed during this period, and discuss avenues of agency available to sex-workers in the realm of Rome’s legal constraints. We also consider the Ars Amatoria and other Latin literary sources for evidence of the toga as a symbol which changes meaning based on its wearer, and the wearer as being perceived differently based on their clothing. In the literature we encounter diametrically opposed archetypes of matron and whore, and understand that sex-workers were able to manage their appearance and behaviour agentively to defy or align themselves with these identities. Finally, the Lupanar, or Purpose-Built Brothel of Pompeii will be examined as well, since it boasts an enormous amount of evidence for a sex-worker’s daily life, and through graffiti demonstrates evidence of self-narration, reclamation of identity and sexual agency. We conclude by discussing how toga-wearing asserted personal identity, action, and group affiliation, and is therefore consistent with other agentive avenues used by sex-workers.