Coherent interactions and thermometry in a trapped ion quantum simulator 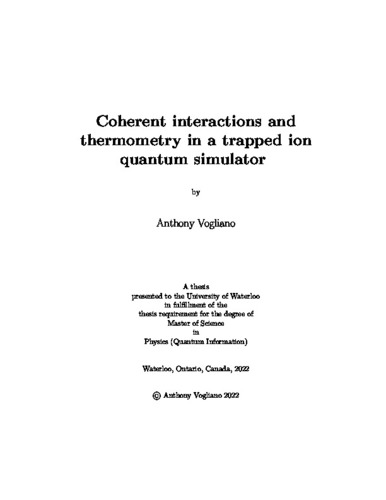 Quantum simulators are useful tools to study exotic systems which may be otherwise intractable for a traditional computer. In particular, the trapped-ion platform has been a leading candidate for use in quantum simulation experiments because of its high fidelity state-preparation and measurement operations and its all-to-all connectivity. The relative difficulty of interacting with the long lived hyperfine states of 171Yb+ ions make them excellent choices for encoding information as the isolation creates stability against a noisy environment. Maintaining coherence for such a long time opens the door for complex coherent interactions, which are a backbone of quantum simulation experiments. One of the most critical coherent operations for a trapped-ion quantum simulator is the entangling Molmer-Sørenson interaction. Building up to the Molmer-Sørenson interaction requires fine control over not just the state of the quantum register, but also the motional state of the ion. For this reason, cooling to near the ground state of motion is crucial to obtaining high fidelity experiments. Characterizing the temperature in such systems can prove challenging, requiring coherent techniques. In this thesis, I describe my work towards preparing a Molmer-Sørenson interaction for a 171Yb+ trapped ion quantum simulator. I detail the methods used to bring-up the coherent Raman interactions, and characterize the Doppler cooling and Continuous Side- band Cooling (CSBC) techniques we use, their implementations on our system, and their limitations. I characterize the temperature of our ions before and after CSBC using coher- ent methods, showing a 46x improvement in the motional state population and confirming that post-CSBC the ions are in the Lamb-Dicke regime. I also summarize my efforts in constructing a future ”blade trap” system with enough precision in the alignment of the electrodes to eventually enable efficient cooling. I show preliminary evidence that 5um precision in blade position should be feasible.