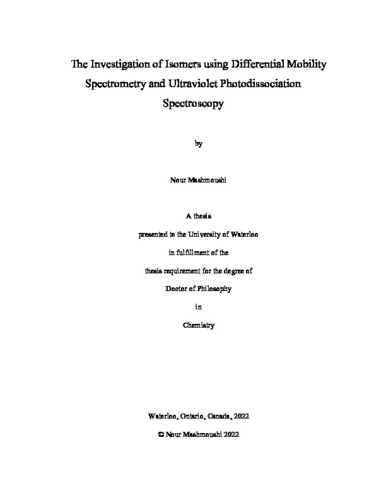 The analysis of complex mixtures in mass spectrometry (MS) is often complicated by the presence of isomers exhibiting the same mass-to-charge ratios. Tandem MS can simplify isomer analysis and enable ion characterization based on their fragmentation patterns. While mass spectrometry dominates the analysis of samples in various fields, it is often paired with orthogonal separation methods to allow for the analysis of complex mixtures. This workflow improves sample throughput for analysis by minimizing time-consuming steps involving sample preparations and modifications required to create distinct fragmentation patterns. The studies detailed in this thesis investigate differential mobility spectrometry (DMS) as a tool for separating and characterizing isomeric species prior to MS. Often used as a prefilter to mass spectrometry, DMS is a variant of ion mobility spectrometry (IMS) that employs an asymmetric electric field to separate ions based on their differential mobility using alternating regions of high- and low-field strength. The resolving power of DMS can be enhanced by the introduction of polar neutral molecules into the gas phase to induce intermolecular interactions with the ions. The resulting gas-phase clusters and dynamic processes taking place in the DMS are dependent on the physicochemical properties of the analytes. With isomers, subtle differences in their properties can be leveraged to induce large differences in the ion behaviour in the DMS. In turn, the DMS behavior of ions can be reverse traced to probe the physicochemical properties of the analytes in the gas phase. In this thesis, different isomeric species are investigated, separated, and characterized using DMS-MS. Thorough investigations are conducted to understand the gas-phase behaviour of ion clusters in the DMS, and computational studies are conducted concurrently to rationalize the observations made. We also probed the electronic structure of DMS-isolated compounds with ultraviolet photodissociation (UVPD) spectroscopy, as while DMS helps separate isomers prior to MS, UVPD can be used to distinguish isomers that are otherwise indistinguishable by tandem MS. The instrumental setup is employed in the study of functional isomers, prototropic isomers and conformers, along with positional isomers. In this thesis, isomers that were challenging to distinguish by MS techniques alone were separated using DMS. Five main cannabinoid isomers are separated by seeding the carrier gas of the DMS with polar solvent vapor. In the case of these ions, it was determined that the composition of the electrospray ionization (ESI) solvent and the polar solvent vapor influenced the survival of ESI-formed adducts. Next, positional isomers, nortriptyline and protriptyline were used to assess the use of DMS-MS coupled with UVPD in the characterization of isomers that present the same fragment ions. UVPD analysis yielded stark differences in their photodissociation efficiencies. Lastly, prototropic isomers of Rivaroxaban—a drug molecule—formed during the ESI process were preserved in the DMS and characterized via UVPD. The coupling of DMS and UVPD to MS provided additional tools in the separation, quantification, and characterization of isomers. The distinct uses of DMS in the analysis of various isomers are highlighted. Identification and characterization were made easier with the ability to probe the interaction potentials of the isomers with solvent modifiers in the DMS and the ability to probe their electronic structures via UVPD.