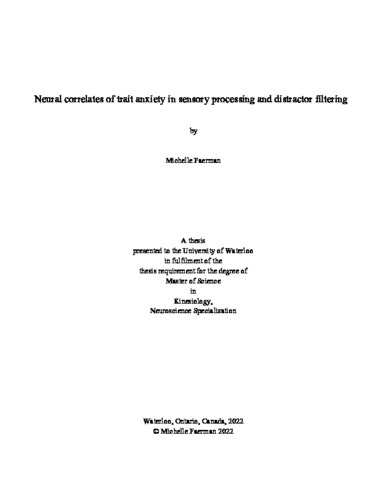 Anxiety, generally defined as an anticipatory heightened state of arousal, has been shown to affect neural markers of cognition and executive components used in sensorimotor function; however, this has infrequently been shown in behavioural performance measures. The effects observed are presumably due to altered underlying prefrontal cortical activity that are then resolved by compensatory neural mechanisms. Despite these findings, the influence of trait anxiety on neural correlates of early stages of cognition and sensory processing, particularly in a multimodal context, has largely been unexplored. The current thesis aimed to address this gap by assessing whether trait anxiety impacts visual and tactile event-related potentials (ERPs) and performance accuracy in a bimodal sensorimotor task. Participants were instructed to attend toward one sensory modality and away from the other while producing a graded grip response. ERP amplitudes and latencies were analyzed to determine whether trait anxiety shows a relationship with neuroelectric markers of sensory and early cognitive processes. Behavioural distractor cost was represented by performance accuracy in the presence of a crossmodal distractor compared to without it. The tactile N70 ERP has been shown to be a marker of attentional relevance in the same visual-tactile experimental task used in the current thesis. Past studies using this experimental paradigm showed that conditions resulting in alterations in prefrontal cortical activity (i.e., continuous theta burst stimulation to the prefrontal cortex and a history of concussion) impacted modulation of this marker. Based on their findings, we hypothesized that trait anxiety would modulate tactile and visual ERPs as markers of sensory processing and attention, in particular, the N70 ERP. No relationship between trait anxiety and behavioural distractor cost was expected. Results indicated that trait anxiety impacted properties of ERPs shown to be susceptible to modulation by endogenous processes (i.e., attention): the tactile N70 as well as the visual P2 and P3. As hypothesized, trait anxiety showed no relationship to distractor cost. This study's findings support the notion that trait anxiety impacts markers of neural processing, despite behavioural performance being maintained. It is possible that these neuroelectric differences are caused by alterations in neurotransmitter systems, such as the locus coeruleus-norepinephrine system, which are then reduced by compensatory mechanisms before the resulting movement is executed. Now that this relationship has been established in a multimodal context, future work should continue to explore the impact of trait anxiety on sensorimotor function from more mechanistic or ecologically valid perspectives.