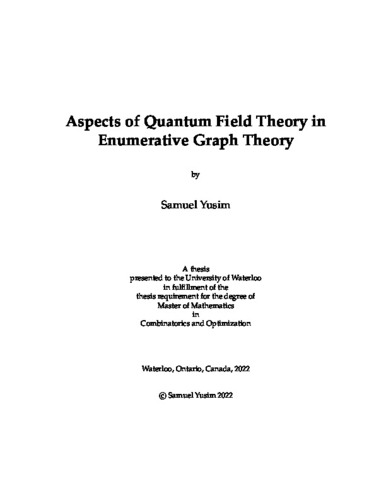 While a quantum field theorist has many uses for mathematics of all kinds, the relationship between quantum field theory and mathematics is far too fluid in the world of modern research to be described as the simple provision of mathematical tools to physicists, as Feynman often framed it. Problems large and small of a seemingly purely mathematical nature often arise directly from a physical setting. In this thesis we focus on two combinatorial problems with deep physical motivations. The first of these is the Quadrangulation Conjecture of Jackson and Visentin, which asks for a bijective proof of an identity relating numbers of maps to numbers of maps which are quadrangulations. We provide a set of auxiliary bijections culminating in a bijection between maps with marked spanning trees and chord diagrams with partitions of the chords into a non-crossing part and a ‘genus-g’ part, and a bijection between these partitioned chord diagrams and four-regular maps with marked Euler tours. The second problem comes from the CHY integral formulation of tree-level Feynman integrals in supersymmetric Yang-Mills theory, but amounts to the enumeration of ways to decompose 4-regular graphs into pairs of edge-disjoint Hamiltonian cycles. We show that for any graph which is the edge-disjoint union of an arbitrary 2-regular graph and a cycle, there are at least (n−2)!/4 ways to decompose the result into two full cycles. Moreover, if the chosen 2-regular graph consists of only even cycles this bound improves to (n − 2)!/2. Further, if the graph consists only of 2-cycles, we obtain the exact number of decompositions, which is (1/2) (n−2)!!S_H^±(n/2−1,1), where S_H^±(a,b) is the so-called signed Hultman number. Interestingly, this combinatorial problem turns out to have further connections to the study of genomic rearrangements in bioinformatics.