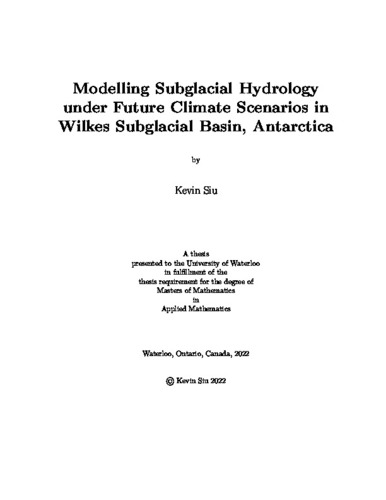 The Greenland and Antarctic ice sheets have differing climates, which makes surface melt a significant hydrological source in Greenland but not currently in Antarctica. Due to a changing climate and warming air temperatures, Antarctica is predicted to experience more surface meltwater in the future. This will likely lead to surface features common in Greenland today, such as supraglacial lakes and moulins, to also form over grounded ice in Antarctica. Moulins in particular are important because they will route this surface melt into basal drainage networks. The resulting change in subglacial drainage characteristics and water volumes will potentially have far-reaching impacts on ice dynamics, ice shelf melt, grounding line stability, and ultimately global sea level rise. To examine this, we model the hydrological system in Wilkes Subglacial Basin, East Antarctica using estimations of the future climate to incorporate moulins and surface melt. We use predictive data generated by the Community Climate System Model 4 (CCSM4) for surface runoff in Antarctica for the year 2100 as inputs to the Glacier Drainage System (GlaDS) subglacial hydrology model. We compare the modelling results from two different Representative Concentration Pathway (RCP) scenarios, RCP 2.6 and RCP 8.5. Moulin locations are predicted using current strain rates along preferential surface hydrology flow pathways and we also compare modelling results with different numbers and locations of moulins. We find that an increase in surface water input from none to RCP 2.6 to RCP 8.5 has a larger impact on basal drainage rates, channel extent, and water pressure near the grounding line. However, compared to increasing surface water inputs, we also find that increasing the number and extent of moulins can have an even larger impact on the subglacial hydrology system. This shows that both moulin formation and the evolution of the climate will play a role in the development of the subglacial hydrology system, which will be important for future ice flow speeds and ice shelf melt rates near the grounding line.