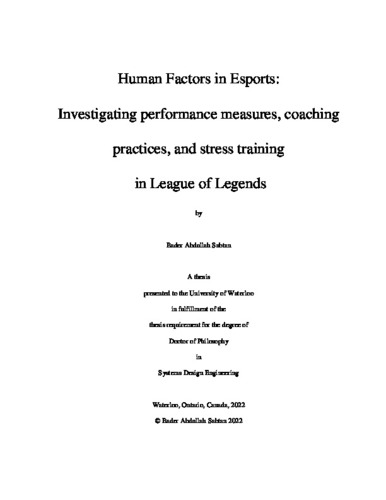 This thesis examined a constant problem in Esports in which players do not perform to their expected potential when under stress (also known as choking). The Esports scene is growing exponentially, with teams valued at hundreds of millions of US dollars and average salaries for professional Esports players around $62,500 annually. League of Legends (LOL) is the most popular, viewed game in Esports, peaking at 4.1 million concurrent viewers and 664,100,000 hours watched in 2021. Additionally, the average LOL professional player’s salary is $350,000, which is significantly higher than the average salary in Esports. The LOL salaries and team’s values are still growing, and thus sustaining and improving LOL players’ performance are essential to protecting investments and minimizing risks. This work, therefore, aims to investigate the existing literature on Esports performance indicators, the causes and potential interventions for choking in Esports, and to understand the literature gap that may prevent this study from solving the related problems that exist in Esports, using LOL as an example. In the literature, training under stress is a well-known choking intervention that has worked in other domains (e.g., traditional sports and the military). When applied to Esports, this technique is used to attempt to familiarize a person with the stressful conditions they will encounter during a big-stage competition by training them under conditions that have physical and social stressors similar to those present in the stage environment. This is done in the belief that the more significant the differences between the stage and training environments, the higher the chances a person may choke. However, designing such a training solution requires knowledge of the stressors affecting Esports players, and additionally, a game activity (an activity that, if improved, will influence a game’s result) and its performance indicator are required to assess the effectiveness of the intervention. The existing literature does not provide enough information to determine the stressors (physical and social) causing choking in Esports, nor does it provide a suitable activity and performance indicator for this study to test an intervention. To this end, three studies were conducted to bridge the literature gap and tailor a solution to choking in LOL Esports Study 1 analyzed over 150 in-game variables, of which 14 were statistically significant between the winning and losing teams. However, while most variables seemed to be associated with wins, they were not seen as being causes of the wins. Creep scores per minute (CSPM) was identified as a suitable task and performance indicator for the experiment in Study 3. Finally, Study 1 produced and tested two new performance indexes that may have potential: spending efficiency and champions’ damage utilization. Study 2 allowed this thesis to, first, determine the stressors (physical and social) affecting Esports players in order to tailor a suitable intervention, and second, understand in great detail the current coaching methods and the challenges coaches face. Furthermore, Study 2 identified nine future research directions that LOL Esports coaches might benefit from. The coaches In Study 2 expressed that Esports players are more sensitive to stress training than players of traditional sports. For example, when they experimented with stress training, it failed and led to burnout. However, this research argues that their interventions failed because the training was not designed properly, as most of their interventions lacked one or more of the intervention’s main elements, i.e., a social stressor, a physical stressor, and a relative game activity, time to adapt, and performance measure. The coaches also added, however, that focusing on training a player’s mechanical skills without stress improved their performance under stress. In Study 3, an experiment was designed to test a tailored intervention on an experiment group (who trained under stress) and compare its effectiveness with the method the coaches suggested for the control group (who trained without stress) over a period of five days. The findings from Study 3 imply that training Esports players’ mechanical skills without stress may improve their performance under stress by a small amount, but also, and in comparison, training under stress improved the experiment group’s performance under actual game stress by more than five times relative to the control group. Moreover, the participants in the experiment group initially showed signs of burnout as their performance declined on Day 2, but then they recovered on Day 3 onwards; this pattern suggests that such training requires time to show its benefits. Finally, this thesis provides some of the missing details in the literature, enabling future researchers to identify the current state and the pain points to generate solutions suitable for Esports players, coaches, and teams. This study explains choking interventions in such a way that can guide a coach to tailor a solution suitable for their choking triggers (a physical and social stressor).