A Study of Electrochemically Induced Lattice Distortions in Layered Perovskites 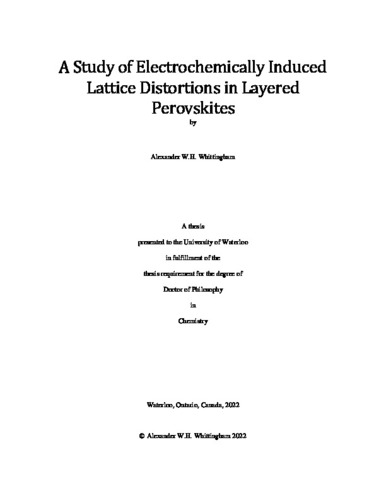 The intermittency of renewable electricity necessitates the development of energy storage solutions that are rapidly deployable. Solid state devices such as fuel cells, electrolyzers and batteries have could potentially address the energy storage problem, but additional advances in material science are required for wide scale adoption. Ruddlesden-Popper oxides are materials with a unique structural layout that enables electronic and ionic conductivity. Numerous compositions of Ruddlesden-Popper oxides have been reported, and several research groups have proposed bulk descriptors towards the goal of controlling their properties in a predictable manner. While many of these descriptors are useful, the electrochemical behaviour of these materials is complex and can result in nuanced changes to their properties. This manuscript seeks to develop a detailed electrochemical map of the processes within these phases to gain insights into their electrocatalytic performance. In Chapter 3, a rigorous structural and electrochemical study of La2CuO4 is presented. Voltammetric characterization was used to identify relevant Cu-based redox processes in the material under ¬inert conditions. The application of potential bias for extended periods at oxidizing and reduction voltages yielded systematic distortions relative to the parent structure. These conditions showed signs of charge compensation through the formation of charge carriers and defects, but also resulted in amorphization of the material. Both effects altered the electrocatalytic reduction of O2 and CO2. In Chapter 4, the surface interactions between CO2 and La2-xSrxCuO4 are elucidated. Utilization of voltametric techniques revealed that the stability of La2-xSrxCuO4 is dependent on Sr content and the presence of CO2. Alternating current techniques revealed that bubbling CO2 into the electrolyte increases the concentration of redox active surface species. In-situ FTIR experiments identified surface bound carbonates as primary carbonaceous surface species. The binding mode of the carbonates exhibit a structural dependency, resulting in bidentate carbonate for La2CuO4 and monodentate carbonates for La2-xSrxCuO4. These findings suggest that the bidentate mode resulted in increased surface strain and drove amorphization in La2CuO4. Chapter 5 explored the dependence of cation substitution on the oxygen reduction activity of La2-xSrxNi1-yFeyO4. Substitution of La for Sr, or Ni for Fe caused systematic changes to the structure and electrocatalytic activity of the Ruddlesden-Popper oxide. Structural characterization techniques revealed that Sr-substitution resulted in expansion the a/b plane and simultaneously elongated the unit cell along the c-axis. Fe-substitution elongated the c-axis without expanding the a/b plane and simultaneously introduced oxygen defects into the material. Hydrodynamic voltammetry revealed that incorporation of Fe into the lattice directly controlled the onset, Tafel slope and selectivity of the oxygen reduction reaction. Correlational analysis concluded that Fe-induced structural distortions are responsible for the observed changes in electrocatalytic behaviour. Chapter 6 expanded on Chapter 5 by examining the effect of Co-substitution on the structure and electrochemistry of La2-xSrxNi1-yCoyO4. A combination of PXRD and Raman spectroscopy provided evidence that substitution of Ni for Co caused a progressive contraction of the unit-cell along the c-axis. Correlation analysis revealed that the contraction of the unit cell is directly related to the Tafel slope of ORR. Chapter 7 provides a summary of the thesis and some concluding remarks.