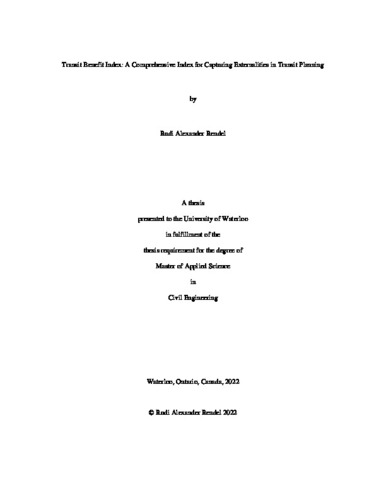 Transportation externalities plague all members of society with delays during travel, as well as healthcare costs associated with crashes, unwanted noise, and air pollutants. While attempts have been made to correct these externalities, they have generally focused on charging travellers for the use of roads or vehicles to fully capture their costs. However, the costs associated through private vehicles can instead be mitigated with the proper funding and support of public transportation systems, which can mitigate the number of private vehicles on roads. Past literature has shown that when users are charged for the use of roads and vehicles, a region’s social welfare can decrease, but an increase in subsidies and funding towards public transportation can provide similar benefits and a competitive alternative to users who primarily make private automobile trips. This research provides a methodology and tool (Transit Benefit Index) for estimating the total societal benefit generated from the substitution of private vehicle trips with public transportation trips. The external costs of private and public transportation trips are calculated in a base case travel demand model and then a mode shift is simulated to calculate the effects of shifting one full transit unit of demand from private to public modes. This shift is performed for all Origin-Destination (OD) pairs in a city or region to find the OD pair which results in the greatest net benefit. These benefits are then normalized using the total vehicle kilometers travelled removed from the network to generate a “Transit Benefit Index”. This methodology is applied to a case study using a travel demand model provided by the City of Bogotá, Colombia. Bogotá was selected due to its impressive BRT system and overall transit connections as well as its prevailing problems with congestion. A total of 12 scenarios were simulated: a base case, and 5 sensitivity analyses, each including two different transit provision per case. The results indicate that the expected savings from shifting travellers from private to public modes provides a greater economic benefit than the cost of a transit ticket in Bogotá. The conclusions are further extrapolated to the cost of a new transit unit, and it is found that the benefits derived from increased transit ridership could recover the cost of a new bus within a year. These results suggest that the City of Bogotá should consider further subsidies to transit fares to generate more transit ridership.