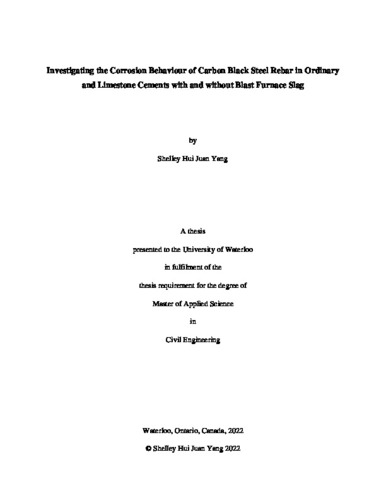 Over the years, strange climate patterns have evolved over the globe, raising flags for concerns on the effects of global warming. Cement production contributes to 8% of the global carbon dioxide emissions. Without regards to the influence of acquisition of the raw materials and transportation, the carbon footprint per tonne of cement is majorly from the kiln process which involves heating the ground raw materials, such as limestone and clay, into clinker to which chemicals are added to create what is known as cement. In the construction industry, efforts to adopt more sustainable approaches are not uncommon. One such approach is the use of Portland Limestone Cement (PLC) in place of Ordinary Portland Cement (OPC). Unlike the heavy adoption in European countries, North American countries are gradually adopting this cement alternative, allowing for up to 15% limestone. Another more common approach is the replacement of cement by ground-granulated blast furnace slag (GBFS). The North American standards, however, limit the replacement by GBFS by 25%. It is not surprising that with the limited research on the influence of the additional limestone in PLC on the rebar corrosion performance of reinforced concrete, it brings hesitation for its use in North American countries where harsh cold winters last longer than warmer climates. With the cold, comes ice and the need for use of de-icing salts on concrete infrastructure to ensure safety of its users. The disadvantage of the de-icing salts to the durability of reinforced concrete structures is primarily the induced corrosion of the reinforcement due to the interaction with the chlorides in the salts. Therefore, the intent of this research is to promote the use of green cement mixes comprising PLC and high levels of GBFS replacement, by investigating the degree of detriment on the corrosion behaviours of carbon (black) steel rebar by the cement replacement. This research assessed the chemical, physical and electrochemical changes of eight cement mixes, OPC and PLC, with 0%, 25%, 35% and 50% GBFS replacement by mass of the cementitious materials. Two types of samples of the various mixes were investigated: cement pastes for chemical and electrochemical evaluations of rebar directly exposed to simulated environments, and concrete for physical and electrochemical evaluations of embedded rebar. Two carbon steel rebar of different surface conditions, pre-rusted and non-rusted, were used for the control mixes which were OPC or PLC without GBFS, while only the latter rebar type was used in the investigations with the other mixes. Reinforced concrete structural components can persist for much longer service lives in the absence of salts than in the reality of the use of de-icing salts. It is because of the highly alkaline nature of concrete which facilitates the formation of self-protective passive films on the embedded rebar. Under the attack of salts in the pore solution of the concrete surrounding the rebar, the passive film becomes pitted, and any discontinuity facilitates corrosion of the exposed area. The pore liquids were squeezed from 28-day hardened cement pastes of the different mixes, each of which were cast in multiple batches for varied admixed chloride concentrations. The direct influence of the changes of the pore solution chemistry on the corrosion resistance of the carbon steel rebar in simulated environments of the pore solutions was investigated using the electrochemical technique of linear polarization resistance (LPR). This type of experiment is an accelerated method which mitigates the need for time-dependent ion diffusion in concrete and allows for direct observation of the behaviour of the rebar in contact with chloride-contaminated pore solutions specific to the chemistry of the various mixes. The results showed the chemistry of the pore solutions of the PLC-based mixes to be comparable with the respective OPC-based mixes, while the electrochemical tests showed that the increase of GBFS replacement in the cement resulted in decreased corrosion resistance of the carbon rebar. The experimental portion involving the reinforced concrete block specimens, which were formed with recesses for ponding wells, comprised primarily of electrochemical measurements. The electrical resistivities and compressive strengths of concrete cylinders, which were cast along with the block specimens of the eight cementitious mixes, were evaluated and the results differed by little to none between the OPC- and PLC-based specimens. The resistivities increased with increasing GBFS replacement. The strengths showed a general decrease with increase in GBFS replacement, particularly for the 50% GBFS replacement. The wetting solution of one of the four/five reinforced concrete replicas of each mix type was left without chlorides while the others were contaminated with 3% NaCl solution for 210 days followed by 5.75% NaCl solution. The electrochemical data showed slight decrease in passive corrosion rates as GBFS replacement level increased. Two chloride-contaminated concrete specimens were autopsied, and it was observed that the chlorides ingress was not yet at the level of the rebar to induce corrosion after 280 days of exposure. The autopsied concretes with GBFS had lesser chloride ion detections, by XRF analyses, than those without GBFS, which was expected with the increased resistivities with GBFS replacement.