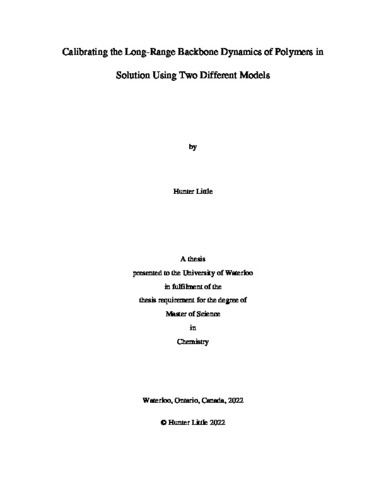 The fluorescence decays of a series of 41 pyrene-labeled poly(oligo(ethylene glycol)methyl ether methacrylate)s (Py-PEGnMA where n = 0, 1, 2, 3, 4, 5, 9, 16, 19) were prepared by free-radical polymerization of 1-pyrenebutyl methacrylate and oligo(ethylene glycol)methyl ether methacrylate. The more polar oligo(ethylene glycol) side chains increased the range of solvent polarities in which these polymers were soluble. The Py-PEGnMAs were dissolved in four solvents, namely tetrahydrofuran, toluene, dimethyl formamide, and dimethylsulfoxide which represented a broad range of solvent polarities and viscosities. The pyrene monomer and excimer decays were acquired for the different Py-PEGnMA solutions and then analyzed globally using the fluorescence blob model (FBM) and the model free analysis (MFA). The FBM analysis yielded the parameters kblob and Nblob along with the product kblob×Nblob. The parameter Nblob, which reports on the number of structural units within an imaginary volume known as a blob, describes the ability of a polymer to bend, while kblob×Nblob reports on the encounter frequency between structural units. Together, Nblob and kblob×Nblob provide information on the long-range backbone dynamics (LRBD) of the polymer. Interestingly, since a single structural parameter, the length of the side-chain, was changed in this study, it was easy to parametrize both of Nblob and kblob×Nblob in terms of the molecular weight of the structural unit and the solvent viscosity. The resulting equations were used to construct a calibration curve against which the dynamics of other polymers could be compared. This represents a great step forward as previous calibration curves were limited to a single solvent in which the benchmark polymers were soluble. Additionally, Nblob was used to extract the persistence length of the polymers from a modified version of the Kratky-Porod equation. Analysing the same decays with the MFA provided a unique opportunity to compare the two very different models. The FBM assumes the polymer has been randomly labeled with pyrene which are distributed into imaginary volumes called blobs according to a Poisson distribution and fits the monomer and excimer decays globally with an infinite sum of exponentials. Conversely, the MFA makes no assumption about the fluorophore distribution and fits the decays with a sum of 2–3 exponentials. This makes the MFA particularly apt to study any type of fluorophore-labeled macromolecules, many of which would be incompatible with the FBM. Regardless of the very different approaches, both models retrieved values representing the average rate constant of excimer formation, <k> for the MFA and kblob×<n> for the FBM, which were identical within experimental error. This result shows that the MFA is capable of reporting on the local pyrene concentration, which in turn provides important structural information. Therefore normalizing <k> for pyrenyl labels incapable of forming excimer yielded the parameter <kMF>blob which was also parameterized in terms of the molecular weight of the structural unit and solvent viscosity, resulting in a universal calibration curve for long-range backbone dynamics. More importantly though, the equivalency between the key parameters retrieved between the two models implied that there existed a similar parameter to Nblob within the results of the MFA which described the number of structural units probed by an excited state pyrene. This parameter highlighted a crucial difference between the two models: in the analysis of the FBM the dynamic component, represented as kblob, and the structural component, represented as <n>, are separated in the analysis whereas in the MFA they are merged into the single parameter <k>. Additional knowledge about the dynamics of the polymer chain is needed in order to accurately extract the structural information contained within the parameters reported by the MFA.