A ca. 273-261 Ma multi-component arc pluton in the southern area of the Beishan Orogenic Collage, NW China: a geochronological, geochemical, and petrogenetic analysis 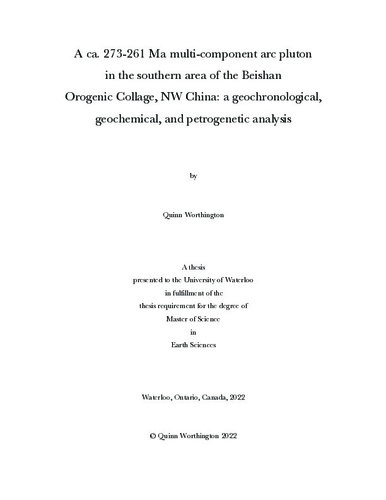 Along the southern edge of the Central Asian Orogenic Belt lies the Beishan Orogenic Collage, bridging the Tianshan Orogen (west) to the Mongolia-Xing’anling Orogen (east). The Beishan Orogenic Collage is thought to represent the final stages of closure of the Paleo-Asian Ocean, and consequently the last tectonic events in the orogeny. The tectonic setting of the region has been a long-standing point of contention, and the timing and location of final ocean closure is highly debated. This study focuses on the geochemistry, geochronology, and petrogenesis of the multi-component Nanquan Quarry pluton located at the southernmost edge of the Beishan, providing new insight into the controversial and poorly understood tectonic history of the region. The pluton is hosted in the South Baidunzi Complex and consists of mingled quartz-diorite and quartz-monzonite, which are intruded by granodiorite. The quartz-diorite and quartz-monzonite both have geochemical signatures indicative of an arc setting, and the granodiorite has a post-collisional and adakitic signature. The mingled mixture of quartz-diorite and quartz-monzonite yielded SHRIMP U-Pb ages of ca. 273 Ma, while the granodiorite yielded a SHRIMP U-Pb age of ca. 261 Ma. This new data suggests subduction was still active in the Beishan Orogenic Collage between 273 – 261 Ma, ca. 10 Ma later than suggested by previous models. This study suggests that the Nanquan Quarry arc formed in either a north-dipping subduction zone between a terrane from the Dunhuang Orogenic Belt and the South Baidunzi Complex, or a south-dipping subduction zone between the North Baidunzi Complex and the South Baidunzi Complex. This new information about the most recent tectonic stage of the Paleo-Asian Ocean could help better define the history of the Central Asian Orogenic Belt.