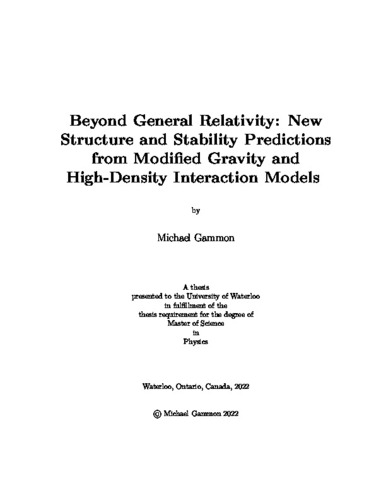 In this thesis a number of topics are explored in an attempt to further understand gravitation and highly dense matter on a fundamental level. The notion of “quark stars” (QS), hypothetical compact stars composed of quark matter (QM), are introduced. We apply a novel, unified, interacting QM equation of state to the Einstein-Maxwell equations in an attempt to model the stellar structure of a quark star with non-negligible confining effects from the strong interaction, and a net charge. Paired with charge distribution models from the literature, we find some general trends in how charge and the strong interaction affect stellar structure of QS, and also identify a new exotic quark star which can have a finite mass & radius with zero centre pressure. The stability of these configurations is also examined, and we find that in general, maximum mass and stability points are no longer coincident on the mass-radius curves. Following this, we discuss higher curvature gravity theories (HCTs), in which stress-energy is in general proportional to a sum of powers of the curvature tensor. We work out slowly rotating black hole solutions to the new four dimensional Gauss-Bonnet scalar-tensor gravity theory, and investigate physical properties like horizon structure, innermost stable time-like orbits (which predict accretion disk structure), and null orbits (defining the photon sphere and black hole shadow). We find that this theory makes very similar predictions to general relativity in most regimes, but limits the allowed parameter space for black holes. The findings in both of these projects can in principle be used to constrain parameters of the theories against observation.