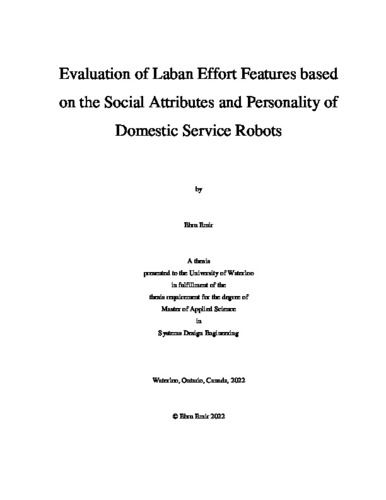 Today, it is not uncommon to see robots adopted in various domains and environments. From manufacturing facilities to households, robots take over several roles and tasks. For instance, the adoption of robotic vacuum cleaners has drastically increased in the recent decades. During their interaction with these embodied autonomous agents, humans tend to ascribe certain personality traits to them, even when the robot has a mechanoid appearance and very low degree-of-freedom. As the social capabilities and the persuasiveness of robots increase, design of robots with certain personality traits will become a significant design problem. The current advancements in AI and robotics will led to development of more realistic and persuasive robots in the foreseeable future. For this, it is crucial to understand people’s judgment of the robots’ social attributes since the findings can shape the future of personality and behavior design for social robots. Therefore, using only a simple and mono-functional robotic vacuum cleaner, this study aims to investigate the impact of expressive motions on how people perceive the social attributes and personality of the robot. To investigate this, the framework of Laban Effort Features was modified to fit the needs and constraints of a robotic vacuum cleaner. Expressive motions were designed for a simple cleaning task performed by iRobot’s Create2. The four movement features that have been controlled for robot include path planning behavior, radius of curvature at rotational turns, velocity, and vacuum power. Next, participants were asked to rate the personality and social attributes of the robot under several treatment conditions using a video-based online survey. Participants were recruited through the crowd-sourcing platform, Amazon Mechanical Turk. The results indicated that people’s ratings of personality and social attributes of the robot were influenced by the robot’s movement features. For social attributes, there were two main findings. First, velocity influenced robot’s ratings of warmth and competence. Second, path planning behavior influenced robot’s ratings of competence and discomfort. In terms of robot personality, the results indicated three main findings. First, random path planning behavior was associated with higher Neuroticism ratings. Second, high velocity yielded higher Agreeableness ratings. Third, vacuum power with higher duty cycle yielded higher Agreeableness and Conscientiousness ratings. In conclusion, this study showed the framework of Laban Effort Features can be applied to fit the cleaning task of a domestic service robot, and that the framework’s application makes a difference in how humans perceive the personality and social attributes of the robot. Overall, the findings should be considered in human-robot interaction when incorporating expressive motions and affective behavior into domestic service robots.

Ebru Emir (2022). Evaluation of Laban Effort Features based on the Social Attributes and Personality of Domestic Service Robots. UWSpace. http://hdl.handle.net/10012/18843