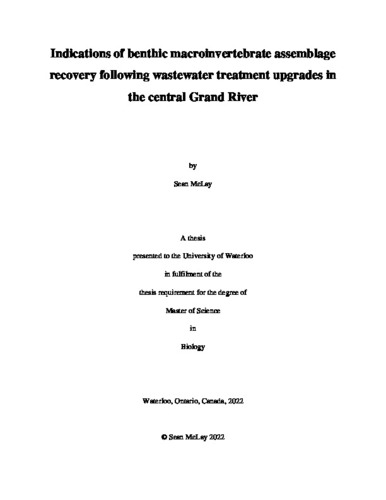 Treated effluent from wastewater treatment plants (WWTPs) can be a source of substantial nutrient and contaminant loading, altering water chemistry and ecological conditions in receiving waters. To meet new regulations and increasing demand, the Region of Waterloo invested in major upgrades to the Kitchener and Waterloo WWTPs, the two largest WWTPs in the Region, over the past decade. As a part of efforts to monitor the effectiveness of these investments, the Region of Waterloo (RoW) initiated a benthic macroinvertebrate (BMI) monitoring program sampling upstream and downstream of effluent outfalls. Using data provided by the RoW of that was collected by consultants in the fall every three years between 2009 to 2018, the response of the BMI assemblage to upgrades at the Waterloo and Kitchener WWTPs was assessed using multivariate analysis on the entire assemblage and univariate analysis on metrics such as family richness. Furthermore, BMI assemblage data was collected at five other WWTPs in the RoW (Preston, Hespeler, Wellesley, New Hamburg, and Ayr), allowing for their downstream effluent effects to be characterized. Additional sites were sampled separate from the RoW’s sampling program as an independent characterization of BMI assemblages along the central Grand River. Spatial and temporal analyses of BMI suggested that the impacts of the Waterloo and Kitchener WWTPs are reducing over time, with upstream and downstream assemblages becoming more similar following upgrades, as evident in the decreasing of average Bray-Curtis dissimilarity in association with upgrades and increased similarity in metrics such as family richness between assemblages. These findings support that WWTP upgrades are succeeding in reducing the influence of effluent discharged into the receiving waters. With some upgrades to WWTPs occurring within a year prior to the last sampling year (2018), and delays in response to amelioration of stressors sometimes observed in BMI assemblages, recovery is likely still ongoing. At three of the five other WTTPs whose downstream impact was assessed (i.e., Hespeler, New Hamburg, and Ayr), there was dissimilarity between upstream and downstream BMI assemblages, although further study is required to confirm the stressors associated with these ecological responses, including natural variability. Continued monitoring using the existing Before-After/Control-Impact (BACI) design to isolate effluent effects from the interannual variation apparent in all analyses is therefore recommended to capture potential effects and/or further recovery.