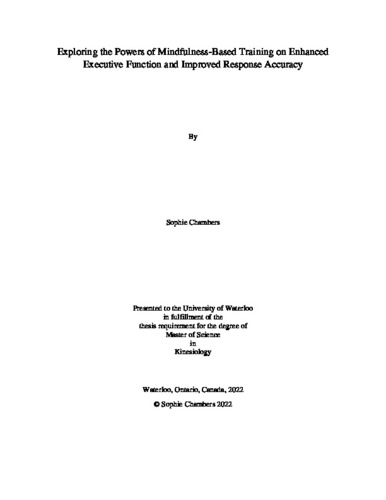 Humans are flooded with a large number of visual stimuli at any waking moment, and to act efficiently, we filter information based on how relevant it is to us and avoid stimuli that may be considered distracting. Research has demonstrated that those who meditate have improved executive functioning compared to controls, however observing the mechanisms behind these improvements, needs further exploration. Visual event-related potentials (ERPs) can be used to assess visual selective attention. Specifically, in response to lateralized attended stimuli the N2pc (posterior contralateral) is associated with top-down attentional selection and the distractor positivity (Pd) with lateralized distractor suppression. Through using these visual ERPs, we were able to explore the mechanisms behind improved visual attention that we see in experienced meditators specifically the lateralization of target selection and suppression. We hypothesized that those who have been meditating consistently can draw their attention more efficiently towards a target, represented by a larger N2pc, and suppressing distractors, represented by a larger Pd. Additionally, we hypothesized that the meditators would respond more accurately than controls and would have a reduction in interference post-error indicated by a larger error-related negativity (ERN). Electroencephalography (EEG) was collected from 28 participants (15 control, 13 meditators; 19-31 years). Meditators had to be meditating for at least the past year with an average of 45 minutes spent in meditation each week. ERPs were measured using EEG to investigate cognitive processing using a modified flanker task where two sets of three-letter arrays were arranged vertically on either side of a white fixation cross, one green array, the other red. Participants were instructed to indicate whether the middle letter of the attended array (red/green) was a consonant or a vowel via keypad. Participants were instructed to attend to either array across 10 blocks (5 attend-green; 5 attend-red) with 100 trials presented per block for a total of 1000 trials. N2pc and Pd were extracted from correct trials only via subtracting contralateral-ipsilateral electrodes (P3/4 and P7/8) relative to the attended target or distractor for the N2pc and Pd, respectively. ERPs were quantified via mean wave amplitude over a time window of 200-300ms (N2pc) and 300-400ms (Pd) after stimulus onset. ERN was extracted by subtracting correct from incorrect trials and taking the peak negative amplitude within 0-150ms after response onset at the Cz site. Response time (latency) was recorded, and accuracy was measured via correct vs error trials (excluding missed trials). Results showed that on average meditators had larger N2pc and Pd components, however, the two-way mixed ANOVAs for the N2pc and Pd did not reveal a significant difference between meditators and a control group regarding the size of the N2pc or Pd component, however the there is a strong possibility of a type II error regarding the N2pc. The effect size for the N2pc indicated practical significance and we may have been underpowered in detecting this significance due to a small sample size. On average meditators were more accurate, however we failed to detect a statistical improvement between the two groups, similarly to the N2pc, the effect sizes regarding accuracy suggest practical significance and that the current lack of statistical significance may be misleading. However, we did find a significant effect of colour in both accuracy and latency revealing that regardless of group, participants were more accurate and had a faster response on attend-green trials. Although ERP data reveal no significance regarding the effect of colour, there was a trend present where in meditators the Pd amplitude was larger in attend-green versus attend-red trials. Suggesting that this effect of colour on accuracy and latency is due to distractor suppression, not target selection. Additionally, there was a main effect of time for both the N2pc and Pd components, participants experienced attentional fatigue in the form a reduced activity directed towards suppressing distractors and attending to targets in the form of a smaller Pd and N2pc, respectively. Overall, on average those who had been meditating for at least a year experienced larger N2pc and Pd components compared to a control, however a statistical significance was not reached as a result of being underpowered in conducting these tests.