Scenario Modeling and Execution for Simulation Testing of Automated-Driving Systems 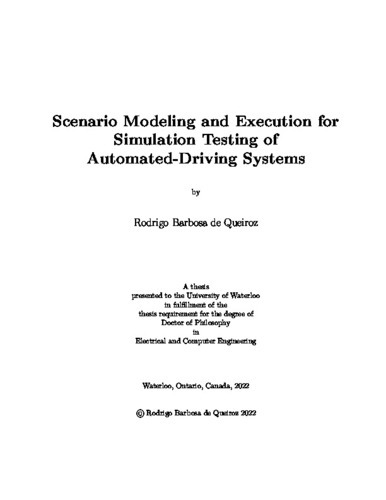 Automated Driving Systems (ADS) have the potential to significantly impact the future of ground mobility. However, safety assurance is still a major obstacle. Field testing alone is impractical and simulation is required to scale and accelerate testing. Further, it covers difficult and rare cases that are too risky to be performed on the closed-course. Evaluating a wide range of operating scenarios in simulation is essential to ensure ADS safety, reliability, and conformity to traffic regulations as the level of automation increases. In order to achieve this goal, Scenario-based testing for ADS must be able to model and simulate traffic scenarios that rely on interactions with other vehicles. Although many languages for high-level scenario modelling have been proposed, they lack the features to precisely and reliably control the required micro-simulation, while also supporting behavior reuse and test reproducibility for a wide range of interactive scenarios. To fill this gap between scenario design and execution, this thesis proposes a Domain- Specific Language (DSL) for scenario representation, and a model for vehicle behavior in scenario design and simulation. The main research goal is to improve scenario modeling and execution for ADS testing in simulation, contributing to safety assurance in ADS development. First, we present the language GeoScenario to help researchers and engineers to develop tool-independent test scenarios, migrate scenarios between tools, and to evaluate their systems under alternative testing environments. The language is built on top of the well-known Open Street Map standard, and designed to be lightweight and extensible. Second, we propose the Simulated Driver-Vehicle Model (SDV) to represent and simulate vehicles as dynamic entities with their behavior being constrained by scenario design and goals set by testers. This model combines driver and vehicle as a single entity. It is based on human-like driving and the mechanical limitations of real vehicles for realistic simulation. The layered architecture of the model leverages behavior trees to express high-level behaviors in terms of lower-level maneuvers, affording multiple driving styles and reuse. Further, optimization-based maneuver planner guides the simulated vehicles towards the desired behavior. Finally, our extensive evaluation shows the language and model’s design effectiveness using NHTSA pre-crash scenarios, its motion realism in comparison to naturalistic urban traffic, and its scalability with traffic density. We show the applicability of SDV model to test a real ADS and to identify crash scenarios, which are impractical to represent using predefined vehicle trajectories. The SDV model instances can be injected into existing simulation environments via co-simulation.