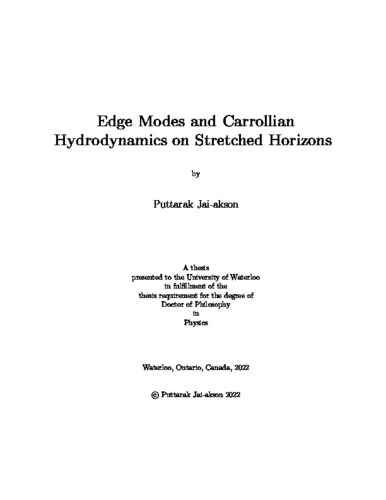 The first part of this thesis is aimed at investigating the crucial role played by emergent boundary degrees of freedom, called edge modes, in gauge theories defined in spacetimes with boundaries. We propose a simple and systematic framework for including edge modes in theories with internal gauge symmetries, and argue that this is necessary in order to achieve the factorizability of the Hilbert space and the phase space. We also explain how edge modes acquire effective boundary dynamics and how they contribute to entanglement entropy using the path integral formulation. In addition, we investigate how edge modes and their corner symmetries may shed new light on the novel understanding of electromagnetic duality and explain the existence of dual magnetic charges and their centrally extended algebras with electric charges. The second part of this thesis addresses the newly discovered connection between physics at null boundaries and Carrollian hydrodynamics. We first present a new notion of symmetries, called near-Carrollian symmetries, that generalizes the Carrollian symmetries and show that they correspond to the conservation laws of Carrollian fluids. Next, we consider a local portion of a spacetime bounded by a finite distance null boundary (e.g., black hole horizons) and foliated into a series of timelike hypersurfaces, known as stretched horizons. By employing the rigging technique, we show that the Carroll geometry is naturally induced on the stretched horizon, and in turn provide a unified geometrical construction of both timelike and null surfaces. We then construct the horizon energy-momentum tensor, which correspondingly defines the dictionary between gravitational degrees of freedom and Carrollian fluid quantities, and show that its conservation laws imply the Einstein equations. Finally, we put forward a proposal that the gravitational phase space of the stretched horizon, treated as a radial expansion around the null boundary, encodes (sub-leading) informations of the null boundary phase space. Most importantly, we report the existence of spin-2 symmetries associated with the spin-2 sector of the Einstein equations on the null boundary.