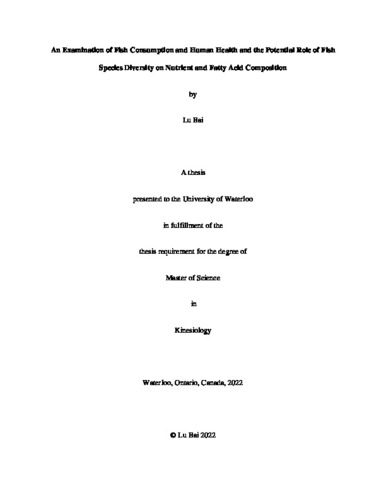 Fish is a major food source for the global human population and is a source of various nutrients, including unsaturated fatty acids especially n-3 polyunsaturated fatty acids (PUFA), high-quality proteins, vitamins, and minerals. Numerous studies have demonstrated that fish consumption reduces the risk of chronic disease and promotes human health. However, heavy metal and environmental contamination is a concern. The objectives of this thesis were to 1) collect evidence from the literature to determine issues related to human health and fish intake; 2) use online databases for estimates of global and Canadian fish consumption, the diversity of commercial fish species, and nutrient composition coverage of fish commonly consumed in Canada; and 3) examine the fatty acid composition of wild caught fish species consumed by an Indigenous population in northern Canada in comparison to national food nutrient databases. In the first study, a scoping review of the effects of fish consumption on human health was conducted. N-3 PUFA is the most studied nutrient component of fish in present review literatures contributing to the health benefits from fish consumption, and other nutrients in fish are understudied. Also, the potential health benefits of fish intake appear to outweigh the risk of detrimental contaminants (e.g., MeHg) in fish. The second study used FAOSTAT to determine the amount of fish produced and consumed by world and G20 and FishBase was used to determine the diversity of commercial fish species, and the Canadian Nutrient Profile (CNF), United States Department of Agriculture (USDA) and FishBase nutrient data was compared for the most popular fish consumed in Canada. G20 members consumed slightly more fish than they produced, and their fish production was dependent mainly on capture fisheries, except for China that has developed a large aquaculture industry. Low fish consumption, regions with cold water temperature and industrialization of the fish food supply appear to have less commercial fish diversity. The FishBase Nutrient Analysis Tool covered a wide range of fish species but at this time appears to be too crude to be used to estimate dietary intakes. The CNF and USDA databases did not cover all the commercial fish species for Canada as indicated by FishBase. In the third study, the fatty acid composition of Canadian Subarctic and Arctic wild freshwater fish was compared with CNF estimates except for Longnose sucker that was not available. The wild fish contained more than 135 mg EPA+DHA /100 g fish muscle but there were large differences in some estimates particularly the Cisco species. More research is required to determine the effect of other components of fish on human health rather than indiscriminately promoting fish intake. Fish diversity and variation in nutrient content due to ecological variation and errors in databases are problematic and limit the ability to assess n-3 PUFA intakes from fish consumption especially in smaller populations such as Indigenous peoples.

Lu Bai (2022). An Examination of Fish Consumption and Human Health and the Potential Role of Fish Species Diversity on Nutrient and Fatty Acid Composition. UWSpace. http://hdl.handle.net/10012/18807