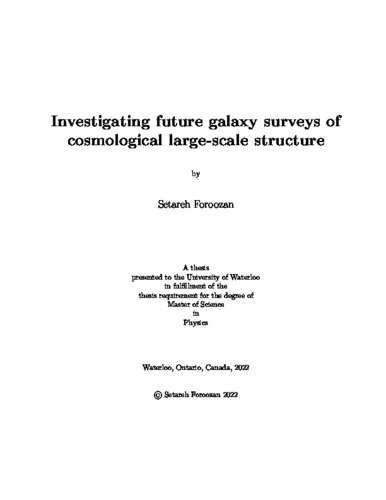 My thesis consists of the two following projects: 1-Testing Large-Scale Structure Measurements against Fisher Matrix Analysis (Chapter 2): We compare Baryonic Acoustic Oscillation (BAO) and Redshift Space Distortion (RSD) measurements from recent galaxy surveys with their Fisher matrix based predictions. Measurements of the position of the BAO signal lead to constraints on the comoving angular diameter distance $D_{M}$ and the Hubble distance $D_{H}$ that agree well with their Fisher matrix based expectations. However, RSD-based measurements of the growth rate $f \sigma_{8}$ do not agree with the predictions made before the surveys were undertaken, even when repeating those predictions using the actual survey parameters. We show that this is due to a combination of effects including degeneracies with the geometric parameters $D_{M}$ and $D_{H}$, and optimistic assumptions about the scale to which the linear signal can be extracted. We show that measurements using current data and large-scale modelling techniques extract an equivalent amount of signal to that in the linear regime for $k\ = 0.08 \,h\,{\rm Mpc}^{-1}$, remarkably independent of the sample properties and redshifts covered. 2- Correcting for small-displacement interlopers in BAO analyses (Chapter 3): Due to the low resolution of slitless spectroscopy, future surveys including those made possible by the Roman and Euclid space telescopes will be prone to line mis-identification, leading to interloper galaxies at the wrong redshifts in the large-scale structure catalogues. The most pernicious of these have a small displacement between true and false redshift such that the interloper positions are correlated with the target galaxies. We consider how to correct for such contaminants, focusing on $\rm H\beta$ interlopers in $[O{\sc\,ii}]$ catalogues as will be observed by Roman, which are misplaced by $\Delta d = 97 \,h\,{\rm Mpc}^{-1}$ at redshift $z = 1$. Because this displacement is close to the BAO scale, the peak in the interloper-target galaxy cross-correlation function at the displacement scale can change the shape of the BAO peak in the auto-correlation of the contaminated catalog, and lead to incorrect cosmological measurements if not accounted for properly. We consider how to build a model for the monopole and quadrupole moments of the contaminated correlation function, including an additional free parameter for the fraction of interlopers. The key input to this model is the cross-correlation between the population of galaxies forming the interlopers and the main target sample. It will be important to either estimate this using calibration data or to use the contaminated small-scale auto-correlation function to model it, which may be possible if a number of requirements about the galaxy populations are met. We find that this method is successful in measuring the BAO dilation parameters without significant degradation in accuracy provided the cross-correlation function is accurately known.