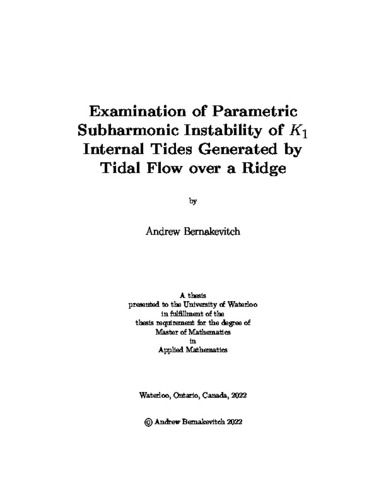 Internal gravity waves are thought to be a predominant source of mixing in the Earth's oceans. Here, we explore the interplay between two phenomena experienced by internal gravity waves - parametric subharmonic instability (PSI) and the changing of their inertial frequency by the effects of rotation (or the effective Coriolis frequency). PSI occurs when three waves satisfy a group of "resonant triad conditions", and we have a higher-frequency wave transferring energy to two waves of approximately half of the original wave's frequency. We get an effective Coriolis frequency in systems where the effects of vorticity are present. Waves experiencing the vorticity "feel" a changed Coriolis parameter, which has the potential to raise or lower the lower bound (or inertial frequency) on allowable frequencies of internal waves. Combined, these factors allow for the occurrence of PSI in regions wherein internal waves would not be able to achieve half the tidal frequency, due to the lowering of the inertial frequency by the effects of vorticity. We apply a 2D second-order finite-volume projection-based model to construct simulations of internal tides travelling over a ridge with the aim of creating such a situation. A variety of different stratifications are introduced into this model to create different background current structures and explore the visibility of the effective Coriolis frequency and the effects of PSI within. Simulations are consistently compared to controls to confirm desired effects and avoid undesirable inertial instabilities. Ultimately, using a carefully managed stratification created via a difference of hyperbolic tangents, the effects of PSI in a region enabled via a lowered inertial frequency are observed, and are confirmed via spectral density analysis to be seen within two orders of magnitude, one order of magnitude, and even eclipsing the amplitude of the primary tidal frequency. This work can help aid in the understanding of global mixing and circulation, and of the types of regions in which effects that may drive them occur.