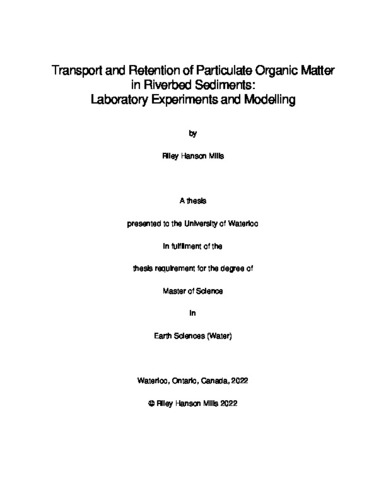 Infiltration of river water into riverbeds can deliver particulate organic matter (POM: the remains of plants, algae, and other life), which has an important role for transforming nutrients in watersheds. Once POM is degraded to dissolved organic matter (DOM), it can provide a source of carbon, electron donors, and nutrients for microorganisms to use in redox reactions that drive nutrient cycles. Remobilized POM, DOM, and oxidation products may be returned to rivers during flow reversals. Over the length of a river, these small-scale riverbed processes can have a cumulative impact on river biogeochemistry, so understanding POM transport and retention processes in riverbeds could help improve large-scale nutrient cycling models. Previous research has shown that in regulated river reaches, river stage fluctuations caused by upstream dams can increase the magnitude of hydrologic fluxes into riverbeds and the frequency of flux reversals. To investigate how the magnitude of vertical hydrologic fluxes into riverbeds influences the vertical transport and retention of POM, this study aimed to identify and quantify vertical transport and retention processes for POM in riverbeds under different flow rates using flow-through reactor (FTR) experiments. It was expected that increasing the flow rate increases the POM mass retained by filtration (not only per unit time, but per unit volume of flux). In FTRs (10 cm length), algae powder (Chlorella, an analog for POM) was applied as a paste to the upper surface of 8 cm of saturated silica sand. The experiment was repeated at downward vertical flow rates of 10-, 15-, and 30- mL/h (specific discharge of 0.2-, 0.3-, and 0.6- m/d), selected to represent the range of hydrologic fluxes into riverbeds that occur in regulated river reaches (based on available literature). To plot breakthrough curves (BTCs), Chlorella concentrations in outflow were determined by measuring absorbance (at 660 nm wavelength). To plot retention profiles (RPs), the mass of Chlorella retained on sand in 1 cm depth intervals was determined using the loss-on-ignition method. A numerical transport model of the experiments was constructed in MATLAB. Velocity enhancement (early arrival) of suspended Chlorella (relative to non-reactive tracer tests) was interpreted to be the result of gravitational settling of the particles, so transport of Chlorella was modelled by advection, hydrodynamic dispersion, and gravitational settling. Retention of Chlorella was modelled by filtration. Experimental data were used to estimate model parameters (porosity and dispersivity for sand; settling rate, input concentration, and filtration coefficient for Chlorella), which allowed the model to produce BTCs and RPs that matched the experimental results. Pulses of dissolved organic carbon (DOC) associated with breakthrough of Chlorella demonstrated the potential for POM to provide a source of DOM in riverbeds. The percentage of applied Chlorella that entered the sand (per unit volume of flux) was found to increase with increased flow rate, which suggests that increasing the vertical hydrologic flux into riverbeds could increase the mass of POM transferred (per unit volume of flux) from rivers (or riverbed surfaces) into riverbeds. To account for the different durations and masses entered in each experiment, the calculated mass of Chlorella retained was expressed as a percentage of the calculated total mass entered (during the entire experiment) per unit volume eluted. At each selected flow rate, experimental results and model simulations both support the hypothesis that in addition to the mass retained per unit time increasing with flow rate (since mass is introduced at a faster rate), the mass retained (as % of mass entered) per unit volume of flux also increases. Additionally, the velocity enhancement of suspended Chlorella particles during downward vertical flow conditions suggests that under repeated vertical flow reversals in riverbeds, there could be net infiltration and downward transport of POM. Therefore, in river reaches where dam operations increase the magnitude of riverbed exchange fluxes and the frequency of reversals in flux direction, the mass of POM delivered to microbial communities in riverbeds may also be increased.