How does emotion affect the way we walk? 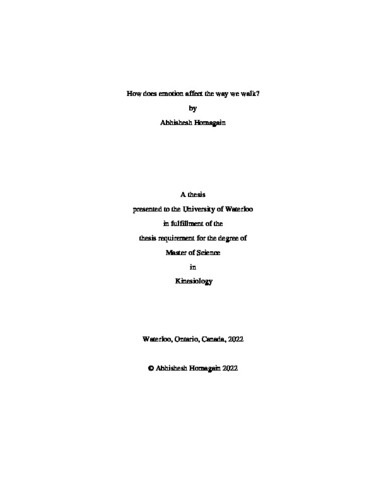 Gait, the way that human beings walk, is a large component and indicator of health in both young and older adults. Gait has been used in the past to identify injury and fall risk, progression of diseases and is used as a measure indicative of overall health in adults. Many factors affect the gait cycle including age, disease, injury, and even mood disorders such as anxiety and depression. This study aims to investigate how moods themselves or emotions affect gait to understand whether everyday emotions may impact gait and whether emotions could be potential confounds in gait analysis. Using the 5-factor model of gait, this study aimed to categorize how gait parameters changed when feeling the emotions of happy, excitement, anger, fear, and sadness. It was hypothesized that emotions of happy, excitement, and anger would result in increased pace while emotions of fear and sadness would result in decreased pace but increased variability when compared to a neutral condition. Secondary analysis of how gait is correlated with changes in the pleasure, arousal and dominance dimensions of emotions were also conducted to map changes in gait to changes in underlying dimensions of emotions rather than specific discrete categories. It was hypothesized that pleasure, arousal, and dominance would be positively correlated with the pace domain and negatively correlated with the variability domain. The study examined 26 healthy young adults and 14 of which were selected for further analysis. Emotions were elicited using virtual reality and immersive video. The results showed that only sadness of all emotion conditions was different from other emotions and the neutral condition. During the sadness condition, participants walked with reduced step length, gait speed (pace domain) and with increased step time and stance time (rhythm domain) when compared to all other emotion conditions including the neutral condition. No changes were observed in other domains of variability and postural control. Correlation tests showed that it was mainly the dimensions of pleasure and dominance that were associated with changes in gait patterns, resulting in positive correlation with step length and gait velocity. Arousal showed a weak negative correlated with stride velocity variability and no other correlations were observed. Overall, these results indicate that while everyday emotions may play some role in influencing gait, it is really the emotion of sadness, that plays a large role in modulating gait; perhaps this emotion should be taken into account as a potential confound for future gait analysis.