Life on Mars: Palimpsests of the Forthcoming Martian Res Publica 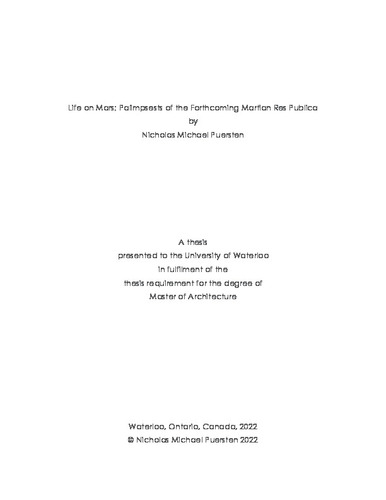 Mars is set to be the new frontier of humanity, and as a result poses a unique set of architectural and engineering challenges to be overcome. Interest into both small and large-scale Martian settlements has greatly increased in the past several years, however many of these projects exist as sole entities within a foreign landscape, ignorant of site, culture, or temporal context. They cannot be considered towns and do not produce a valid form of public space as we know it. This project aims to explore and suggest an alternative: a set of architectural frameworks based on vetted engineering solutions and urban design principles from which a uniquely Martian res publica could grow and thrive, all within the context of a long-term colonization and terraforming effort. Through diagrams, drawings, and written text, this thesis explores the growth of a settlement on Mars at three different stages of terraformation and attempts to understand the driving forces that shape how Martians might live.