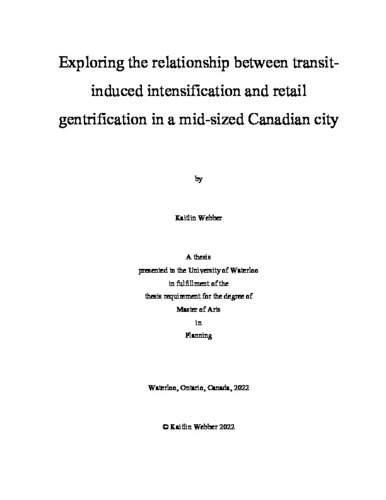 Over the last two decades, the back-to-the-city movement and a shift in planning ideals towards intensification have spurred a renewed interest in rapid transit systems. Modern rapid transit systems are predominantly developed in tandem with transit-oriented development (TOD) planning principles, which encourage, and often incentivize, compact, mixed-use development in station neighbourhoods. In response to the resurgence of rapid transit systems, a growing body of research explores the relationship between rapid transit systems, TOD planning, and gentrification. This “transit-induced gentrification” research focuses primarily on the impacts of new transit infrastructure and TOD and the often-resulting conditions of unaffordability, displacement, and demographic change. However, we argue that a fundamental component of transit-induced gentrification is missing from the literature, that is, transit’s impacts on commercial businesses. In this thesis, we bridge the gap between transit-induced gentrification and commercial gentrification literature by investigating transit-induced commercial gentrification in the Region of Waterloo, Ontario, Canada, following the implementation of a light rail transit (LRT) system. Through a secondary data analysis of an employment survey presented in Manuscript 1, we explored compositional changes inside and outside the central transit corridor (CTC) between 2011 and 2018, and found significant evidence of commercial gentrification, especially in Stage 1 of the CTC, where the LRT is currently operational. In Manuscript 2, we interviewed business owners in Downtown Kitchener and UpTown Waterloo, which reinforced our quantitative findings and provided additional details not captured in our quantitative work. Our interview results also revealed the mechanisms fueling commercial gentrification in the urban cores, including the significant role of LRT construction in accelerating this process, and profiled how business owners have adapted to the demographic and built form changes associated with gentrification. The results presented in this thesis are applicable both to the Region of Waterloo, as they begin planning for Stage 2 LRT implementation, and for other mid-sized municipalities considering rapid transit.